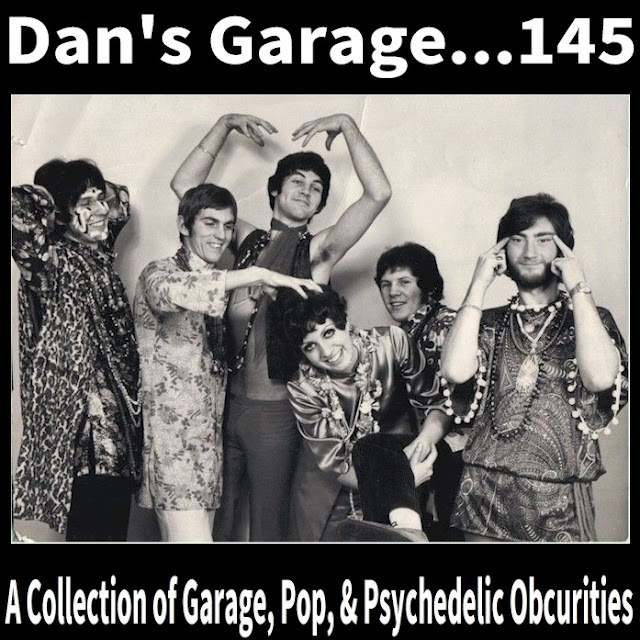 Greetings music lovers!!!! So, I've gotten into a "groove" so to speak, where whenever I play a record that I haven't posted on this blog, I rip, and then, voila!!! I've got content to work with. Now that's genius! I have a ton of stuff here in the basement that hasn't been included here and my biggest problem is that I'm terribly dis-organized. For the last two years, I've VOWED to alphabetize and sort these records out, but some other chore gets in the way. I also need lots more record boxes. Oh, yeah, I'm not sure if all of you are paying attention, but this inflation thing is hitting me hard in this area. I used to buy ten 45 storage boxes for just over $55, (full disclosure here.. I live in Rochester, N.Y. where "Bags Unlimited" is located and if you pay cash and pick up, you get a discount), now they cost around $80. That's for twenty pieces of cardboard (boxes and lids). Got that??? Twenty pieces of CARDBOARD. I know, they're cut very nicely, and you can fold them easily, BUT IT'S FREAKIN' CARDBOARD!!!!
So, I've had to hold off on buying storage for these things and now I have stacks of records piled up all over the place and I can't keep track of them. Little by little I pick up little stacks and sort them into "newer" and "older" 45's, this way I can keep things fresh on the Radio Free Phoenix and Deep Oldies show which by the way (insert shameless self promotion HERE) is on every Wednesday night at 11:00 PM eastern daylight time on RFP, and streamed again on Sundays at 3;00 PM at Deep Oldies, both great places to listen to cool music, and you know it's cool because they allow me to spin 45's for an entire hour and demonstrate my HORRID broadcast talents every week. Also check out my You Tube Channel (more shameless self promotion) which features most of the content featured here on this blog.
This post, as usual, features "a plethora of fine 45's" so as I say every week on the show...
LET'S GET RIGHT TO IT!
Rondels - C'mon Let's Go /Sweetheart (1964) 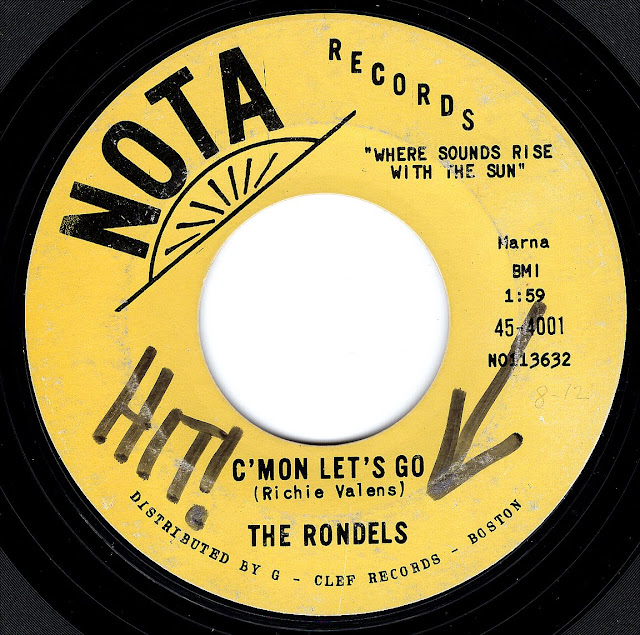 Kicking off this post is a band from New England, and I guess Boston would be where these guys came from, although little is known about them, they could have been from anywhere in the area. 45cat.com has this listed with the "Ron-Dels" 45's that featured Delbert McClinton, but I'm not convinced that they are the same band. Great frat rock on both sides of this as they tackle Richie Valens' "C'mon Lets Go". The flip is actually as good, if not better, that the 'A' side.
Bern Elliot & The Fenmen - New Orleans / Everybody Needs A Little Love (1964) 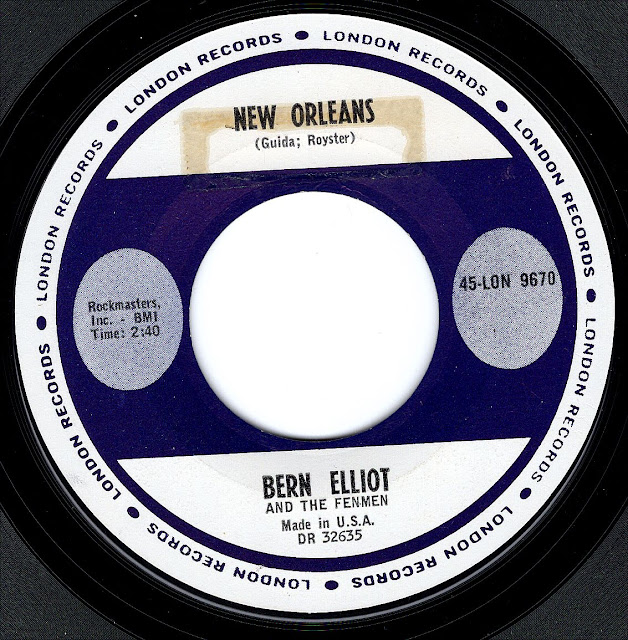 Bern Elliot were from Kent, England which is just outside of London, and unlike their neighbors, The Fenmen adopted more of a Liverpool beat style than say guys like the Rolling Stones and The Yardbirds. This 45 which was released on Decca in the U.K. is a real good version of "New Orleans" a song often covered by groups on both sides of the Atlantic. Bern issued some solo 45's in '65 and the Fenmen broke away to release a few singles without Bern. Eventually, a couple of the Fenmen joined the late 60's Pretty Things and had some success with them.
Billy Thorpe &The Aztecs - My Girl Josephine (1965) 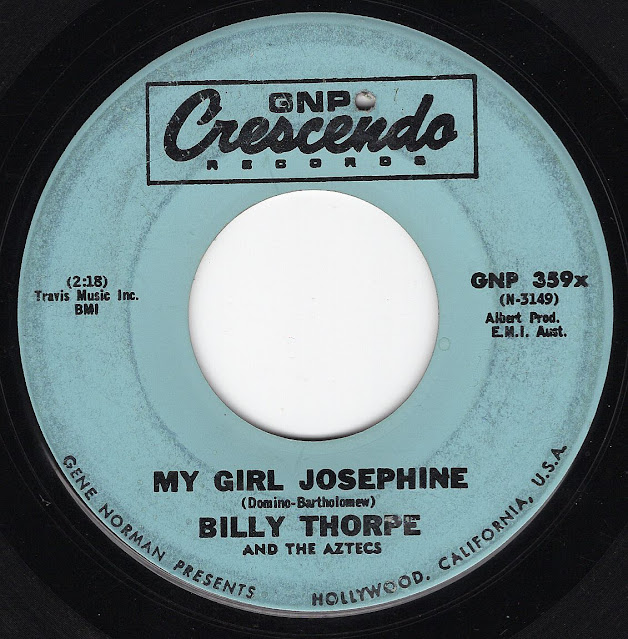 English born Billy Thorpe, was a huge success in Australia starting in the early sixties and performing into the mid 70's where he became a producer and a composer of TV scores including one of my all time favorite TV shows, Colombo. This 45 mixes a pretty routine version of The Platters' "Twilight Time" with a rockin' version of "Hello Josephine" re-named "My Girl Josephine". I left "Twilight Time" out because it's really not that good. Especially compared to the "B side".
Romans - The Drag / After You Go (1965) 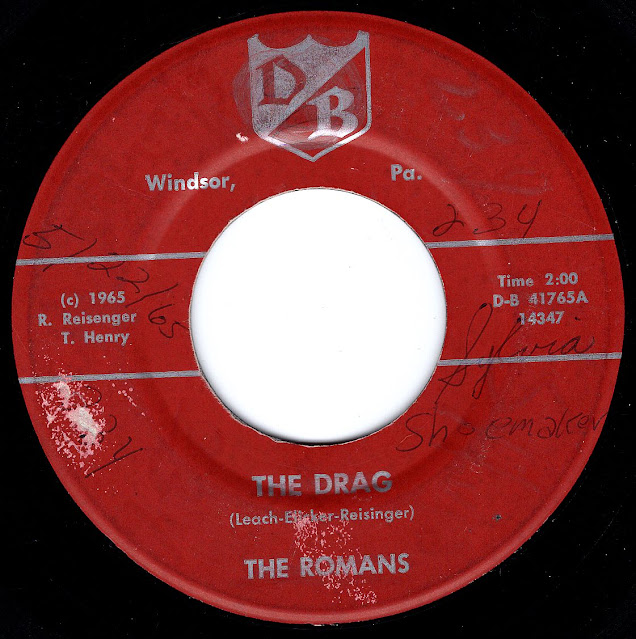 Supposedly from York, PA, here's a typical outfit from PA slogging it out in the local recording studio with some outstanding Hi-Fi results! Just kidding. This is typical "frat rock" from the mid-sixties that probably every band from coast to coast tried their hand at. In my book, this is what I consider real "Garage Band Music".
Adrian Lloyd - Lorna / Got A Little Woman (1966) 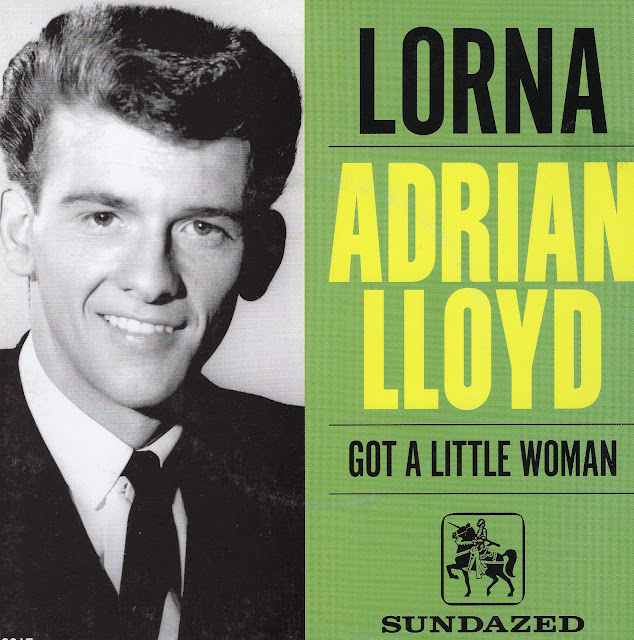 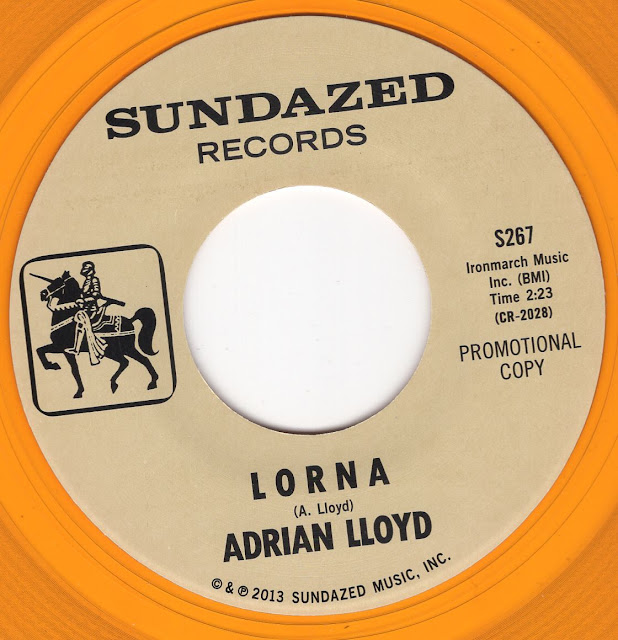 I generally shy away from posting re-issues on this blog, mainly because you can pretty much get them anywhere, and in my opinion, they are nothing particularly special. There are exceptions though. In the realm of really hard to get 45's that are legendary, and killer, we like to include them here and such is the case with this 45 by Adrian Lloyd which was re-issued for what they call "record store day". Hell, when I was younger, every day was record store day. I'd go to a record store any chance I got. I practically lived in those freakin' places. Now it's sort of a "holiday" for record collectors with a lot of money and they issue "limited edition" records, just for "record store day". Not a bad concept in theory, but it turns out it's just a money grab for some record companies, and a chance for "collectors" with deep pockets to buy as much as they can before anyone else does, and gouge other people on Ebay that didn't get what they wanted the first time around. Fortunately, this 45 came up for what I considered to be a fair price given it's quality. The original issue of this on Charger Records is really rare, so this is an exceptional re-issue.
On to the music..
This is perhaps one of the greatest garage band performances ever to be laid down to wax.
Somehow, Adrian Lloyd, a drummer, who was a transplant from England managed to join The Rumblers, who had a hit in 1962 with the instrumental "Boss", which is a surf classic. If any of you are familiar with this 45, the flip "I Don't Need You No More" was the better side, with Adrian 's snotty vocals at the fore, an omen of sorts, especially when you hear this track. He then formed his own band Adrian & The Sunsets and they released a classic surf LP .
Fast-forward to late 1965 where Adrian went into the studio to record this gem. He not only sang and screamed, but played drums as well. This is one of those 45's where I wish I was a fly on the wall in the recording studio experiencing all of this. Adrian literally becomes unhinged as he goes through this number, every scream more intense than the last.
Thank you Sundazed records for having the savvy to re-issue this particular 45, and apologies to the Ebay seller as well. You certainly weren't gouging anyone here, although I'm aware you have multiple copies of this. Fair is fair.
Did I mention the flip side??? Oh yeah, that's way cool as well, a menacing minor chord "ballad" that  is a classic as well.
Liz Brady with Jaques Denjean's Orchestra - Hey O Daddy O / Comme Tu Es Jeune (1966) 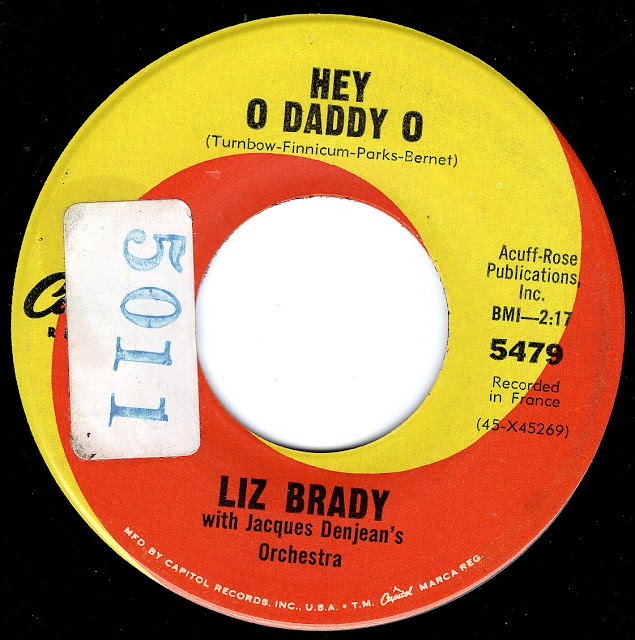 Let's go to France, where Liz Brady covers one of the cooler songs issued by The Newbeats, "Hey O Daddy O". I have to be honest, I don't know a whole lot about Liz, but I really like this 45 because there's quite a bit of energy here, and that's what counts the most on 45's like this. I included the flip because I'm a sucker for ballads sung in French.....
Michel Polnareff - La Poupee Qui Fait Non / Chere Veronique / Beatnik / Ce Que Je Chereche Est On Toi (1966) 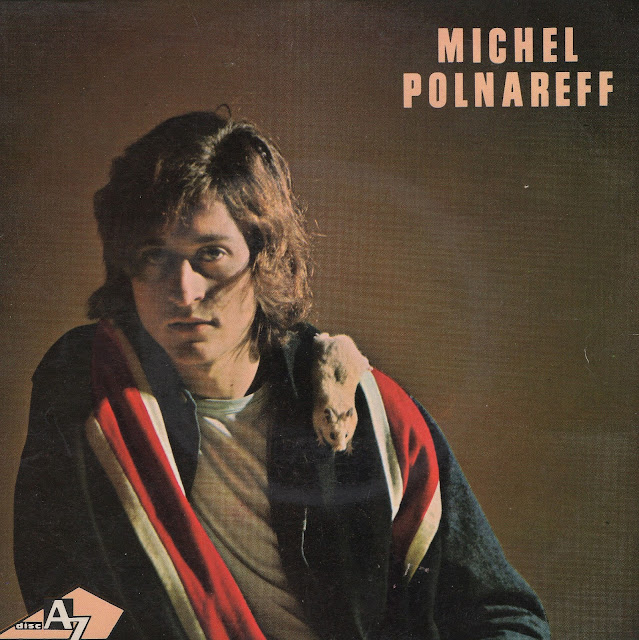 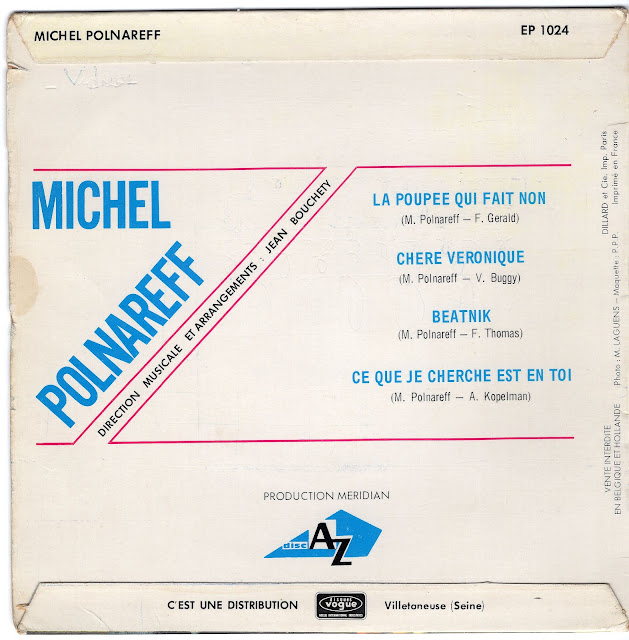 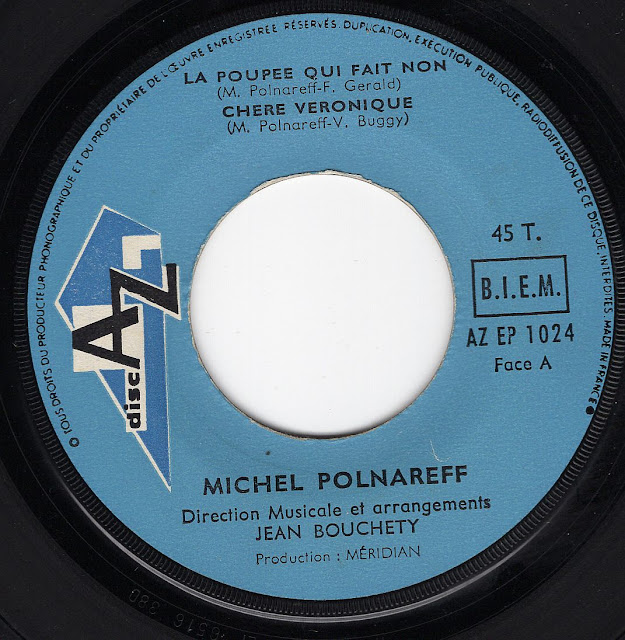 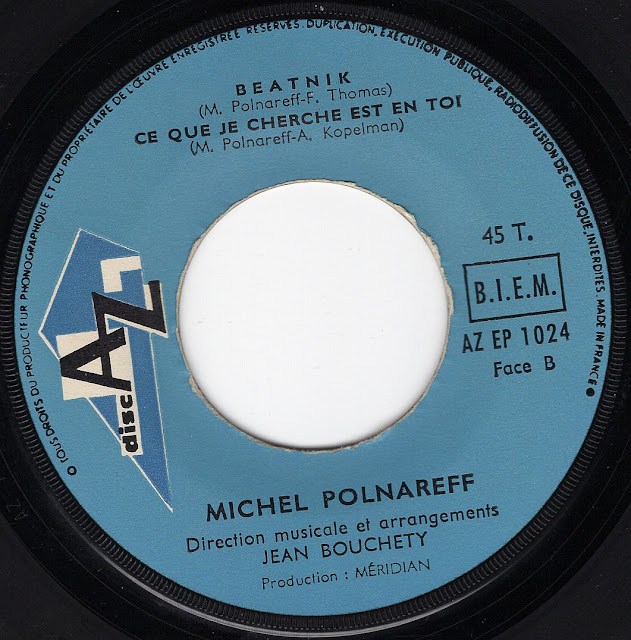 Yay!!!! More French stuff, this time from Michel Polnareff, who was, and still is a popular figure in French pop music. This E.P. covers some different styles from folk/rock to pop to straight up rock, and it's all quite good. A very enjoyable record I must say!!!!!
Episode Six - Love-Hate-Revenge / Baby, Baby, Baby (1967) 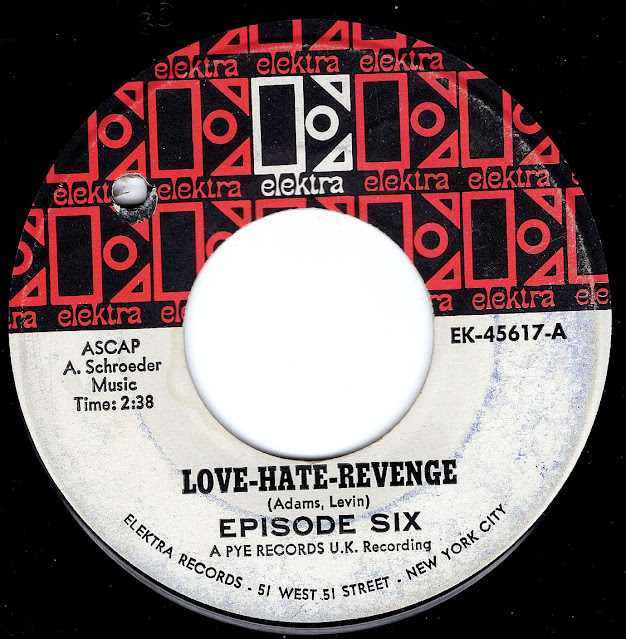 Episode Six is mostly famous for including a pre-Deep Purple Ian Gillian and Roger Glover in the band. They were a very good band and this 45 shows it. They released around a dozen 45's in the U.K. and four here in the U.S. Unfortunately I've only heard this one and "Mighty Morris Ten" which came out here in the states on Warner Bros. Records.
Cherokee - I Can't Reach You / Willie And The Hand Jive (1968) 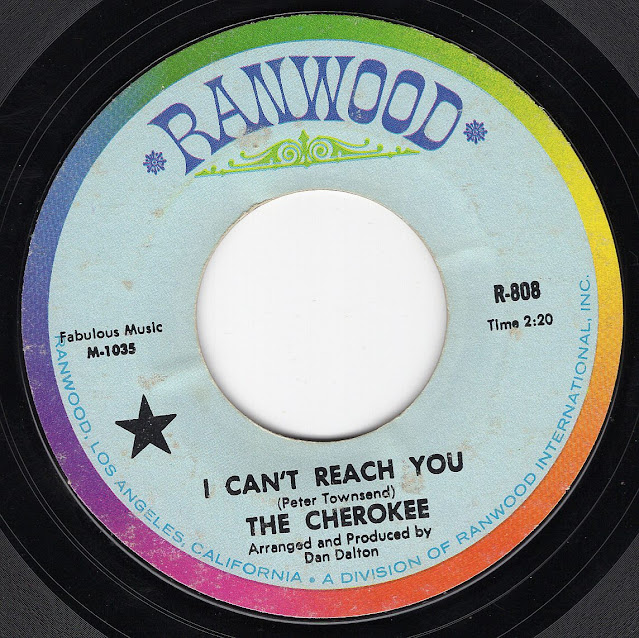 You know me. I'm always taking chances on 45's out there, and there obviously are hits and misses. I couldn't pass this one up even though I'd never heard it mainly because this is some unknown band covering one my all time favorite Pete Townsend compositions, from one of my favorite Who L.P.'s. I wasn't sure what to expect. First of all, Ranwood Records was collaboration between Randy Wood who founded Dot Records, and Lawrence Welk (of all people) so's they could release all of Welk's Dot recordings independent of Dot Records, because Welk owned all the rights to everything he recorded on Dot.
Obviously they needed a few other acts to fill out their roster, so The Cherokee must've been one of them. I have one other 45 on this label by "The Sounds Of Sunshine" a real "sunshiny" pop 45 but outside of these two , I haven't heard anything else.
Produced and arranged by Dan Dalton who was also involved with quite a bit of music in the mid sixties like the Peppermint Trolley Company, The Peanut Butter Conspiracy, and as a member of the folk group "The Back Porch Majority".
So, how's the music???? Quite interesting I might say. This is probably a love it or hate it 45, but I love it. They take one of Pete Townsend's finest songs and put a "La Bamba" riff to it for the intros, but kind of get back to the feel of the original during the verses and the choruses. Although this side is marred by dopey horns, It's still very good, and the flip is a fuzzed up version of Johnny Otis' "Willie & The Hand Jive".
Steve Lee - She's Afraid To Answer/ Baby (1968) 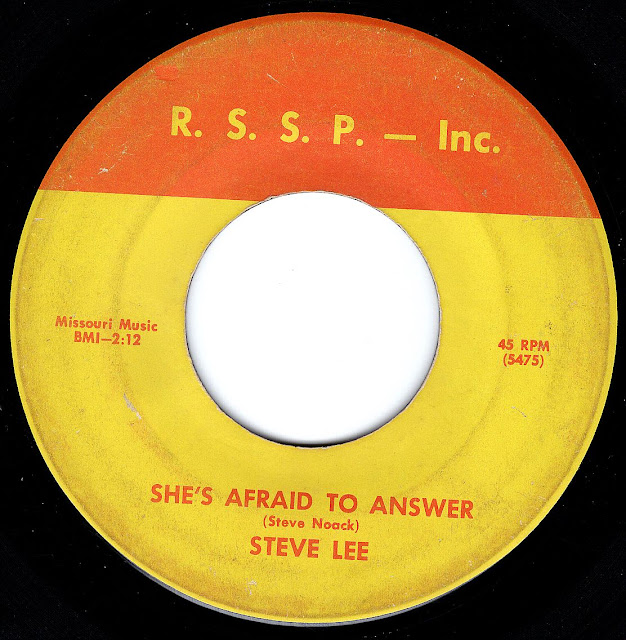 Steve Lee, A/K/A Steve Noack, was a musician from St. Louis, MO and was in a band called The Happy Return which was featured in IDG #91. This is slightly different than the  the Happy Return 45 and came out around a year prior. Both sides are good, but the A side is the better one.
Uniques - Groovin' Out (1967) 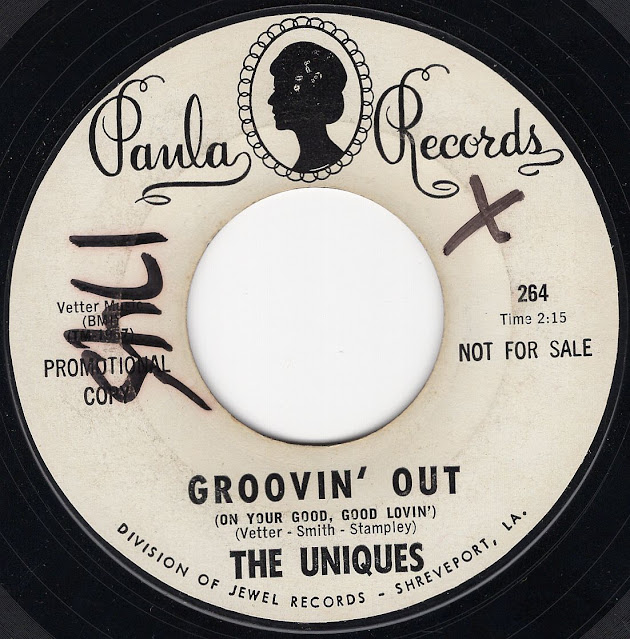 I needed a 45 to fill this post out to 28 tracks, so I grabbed this one randomly. I like the Uniques. They had a bunch of 45's on Paula Records and some of them are really freakin' good. This one is OK. I could do without the stupid kazoos.....
Battalion Tweed - But It's Alright / Last Time (1969)