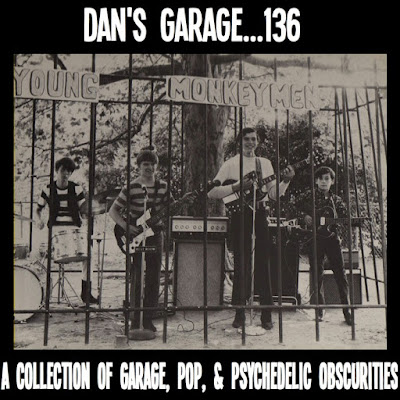 Greetings music lovers!!!! I hope all are doing well out there during this rather messed up episode in human history. I myself am doing as well as I possibly can although we've taken a bit of a financial hit because of this "situation", but we'll keep posting here as long as we possibly can! Due to previously unforeseen circumstances, I've had to put a moratorium on buying records but I can assure you that I've got scads of way cool 45's not entered in this blog yet so I'll be busy for a while.
We here at Dan's Garage Central are trying to stay sane while we suffer the effects of this pandemic AND the resulting fallout. Ironically, this actually leaves me with more time to spin records and write this blog, I mean, it's still too early to do any real outdoor work around here, and because we're "tightening our belt" so to speak, major household upgrades are on hold (for the short term I assure you). We're well stocked with food and stuff so we don't have a lot of shopping to do, but what the hell, try finding a packet of yeast around here! I had to go to a local bulk food store and buy two pounds of the shit just to bake a couple of loaves of bread! I'll be experimenting in the kitchen every weekend for the next two years!!!!!!
Oh right....the blog....
As I said,  I actually have a bit more time on my hands so I'll take advantage for now. I'm still poring through boxes of records trying to figure out what hasn't been posted yet and by my calculations, there's a LOT!. So we'll continue this time around with a rather "eclectic" handful of 45's that I'm sure will please all of you out there.
Many thanks to our friends and followers of this blog for the very kind comments. Keep them coming and please share this blog wherever you can!
Without further adieu.....Dan's Garage #136

There's a few friends and followers out there who are having trouble finding a download link through Box. I tried accessing it with my Iphone and came up with a blank page which seems to be the trouble some are having. I was able though, to copy the url from the link, paste it into a browser and voila! The page with the link came up. I'm not familiar with Macs because it uses a one button mouse, but I'm guessing the operation is similar to the Iphone. I like to use Box because 1. It's free and 2. the links don't expire. I hope this helps. Thanks, Dan. 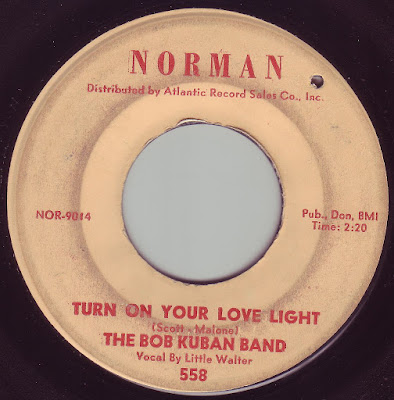 You know I must confess, I really HATED bands with horns. Back in "the day", we garage punk enthusiasts would poo-pooh this 45 as total bullshit, and I'm sure some of the so-called "garage elitists" today will do the same.
When I was a young lad I really hated clams. I also hated bourbon whiskey and dry red wine and a host of other things that today, I find quite tasty like Gorgonzola cheese and raw oysters.  As I grew older,  I started to "acquire" the taste for those things as well as the taste for records like this one.
Bob Kuban was a drummer from St. Louis, MO and formed his band in 1965 as simply "The Bob Kuban Band". He later changed the name of the group to "Bob Kuban & The In-Men" and had a sizable hit in 1966 with "The Cheater".
One cannot deny the raw intensity of this track and sheer enthusiasm that goes along with it. As I mentioned previously, I have acquired a taste for a lot of music that does not fall into the "garage-punk orthodoxy" and this is a good example. Dig it.... 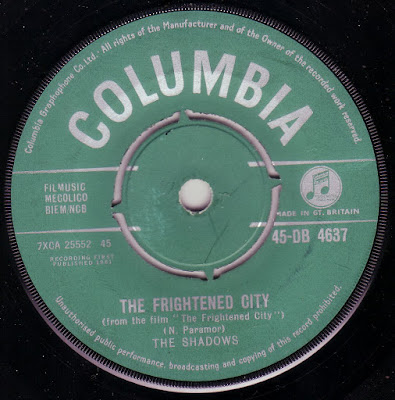 The Shadows were perhaps the most influential band in the UK in the post "skiffle group" era. This would be "pre-Beatles" I might add, but even The Beatles were tremendously influenced by them and their classic cut "Cry For A Shadow" is a good example. I was lucky to nab this one at a bargain price a few years back and I think it's one of their best. 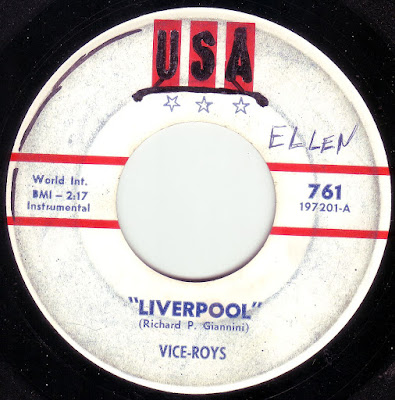 There were a few "Vice-Roys" floating about in the early to mid sixties. One of them was from the Pacific-Northwest but I'm pretty sure these guys were not them as the USA label was out of Chicago,IL and this group was most likely from that area.
This is a rather interesting 45. I'm not sure who the group was, but they had a very interesting take on the "Liverpool" thing as evidenced by this two sider. "Liverpool" starts with a "I Want To Hold Your Hand" intro but immediately goes into an extremely cool instrumental with a ska beat! The 'B' side is pretty cool as well. 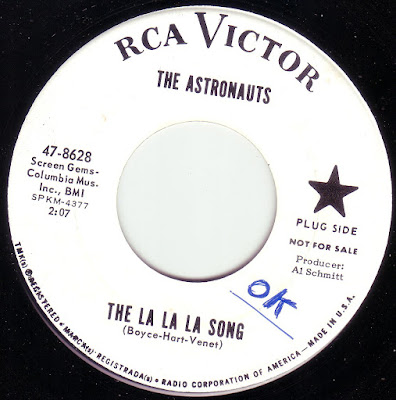 I love The Astronauts. They had about a gazillion 45's & LP's on RCA Victor, and made a few appearances in a couple of 'B' movies that were teen/surf related. This 45 was released while they were "transitioning" from a pure surf band to a "beat" group. The'A' side is a great pop effort and the 'B' side is a good take on the Buddy Holly classic. 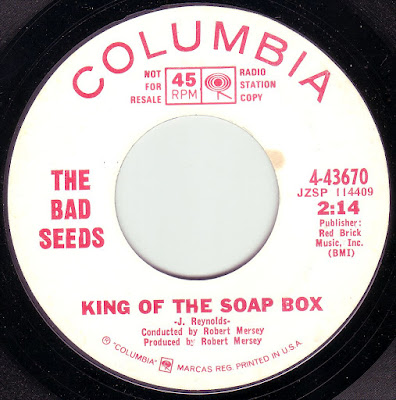 The Bad Seeds (on Columbia records) were reportedly from Kentucky and had nothing to do with the legends from Texas. That being said, this is an excellent two sided folk rocker that is well produced as many of  Columbia records were. I just wish I knew more about this group.... 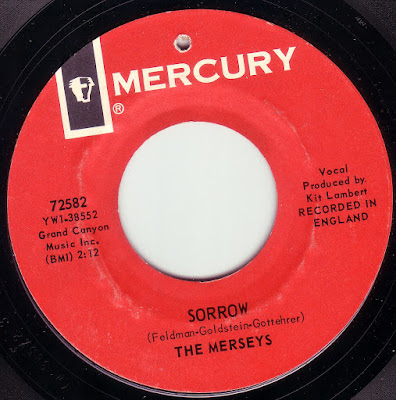 Originally known as The Merseybeats, guitarist/vocalists Tony Crane and Bill Kinsley broke off of the group and formed a duo and simply called themselves "The Merseys". Obviously they changed their style as well, moving into a pop direction with big production. They made a few appearances on the German "Beat Club" program and had a minor hit with this cover of The McCoys' "Sorrow". 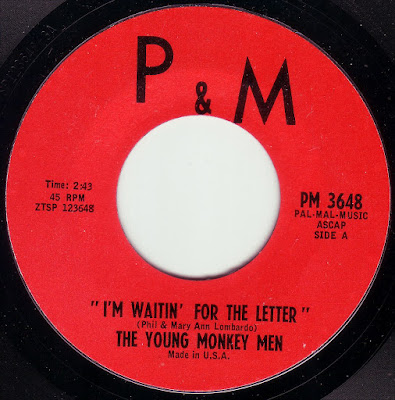 This bunch was from Trenton, NJ and had two other 45's both very good including the moody garage/punk classic "I Believed You" which was featured on a volume of "Teenage Shutdown". This two sider is really good as well with some nice fuzz guitars courtesy of lead guitarist Eugene Patricella. 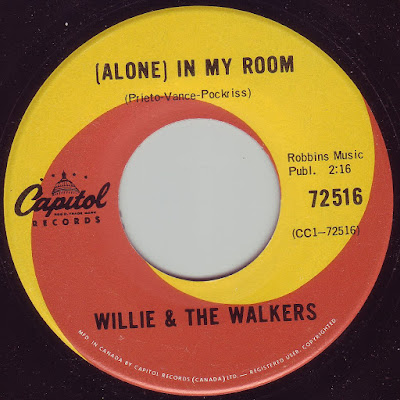 Willie & The Walkers were a very popular group out of Edmonton, Alberta, Canada and were together from about 1965 to 1972. The group was led by Bill "Willie" MacCalder who played keyboards and sang lead vocals. They had a nice career opening for acts like Dino, Desi, & Billy, The Guess Who, The Box Tops and others. The 'A' side of this is a cover of "(Alone) In My Room" which was originally done by Verdelle Smith, a somewhat obscure R&B singer, and later done by The Walker Brothers. This version obliterates both of them. With a sinister, haunting organ intro, the song tells a typical story of a love that has died and how the singer (Willie) is coping with it. This is real good stuff and the whole thing is genius in my very humble opinion. In late 1966 these guys took a long trek down to Norman Petty's studio in Clovis, NM to record this 45 and the results are A-1. This 45 was also released about a year later in the U.S. on United Artists. 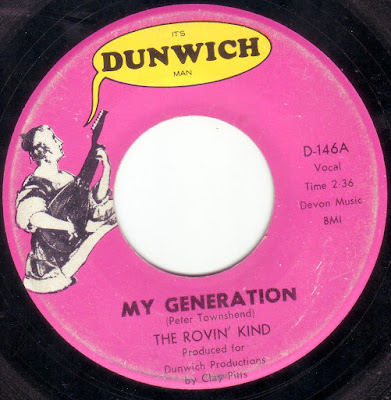 The Rovin' Kind were an outfit from Chicago, IL that had about a half dozen 45's on several different labels including Smash, Roulette, and a couple on Dunwich as shown here. This one takes a somewhat inept stab at The Who's classic, not that the entire band struggles with it, but the bass player seems to have a hard time replicating John Entwhitsle's iconic solo. The flip is a decent cover of The Beatles' "Girl". The Rovin' Kind would eventually evolve into The Illinois Speed Press which had two 45's on Columbia (one featured in IDG #74) as well as an LP. Band member Paul Cotton went on to replace Jim Messina in Poco in 1970. 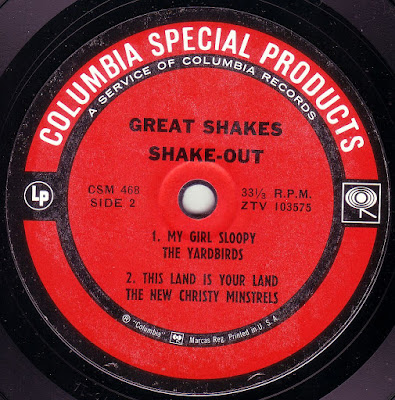 This song here is really no "great shakes" and probably one of The Yardbirds' throwaway tracks (although I could be completely wrong about that) that was featured on this groovy EP presented by "Great Shakes" which was kinda like Nestle's Quick, but as you continued shaking it, it got really thick and turned plain ol' milk into a frothy milkshake. Here's some pics of the cover... 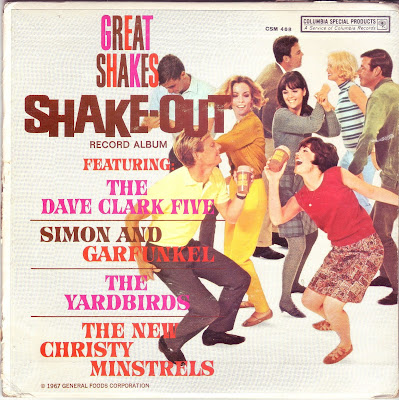 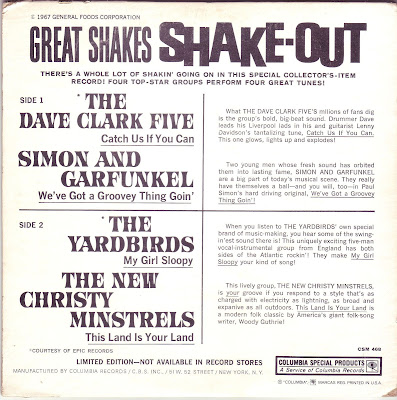 As you can see, teens are rocking out to the hip sounds of this EP while shaking their "Great Shakes"
I remember my oldest brother being wild about this stuff and I also remember the plastic "shaker" that came with it. Great Shakes was promoted in radio ads by The Blues Magoos, The Who, and a few other cool bands of the era. Sadly, Great Shakes disappeared from the shelves never to be seen again. 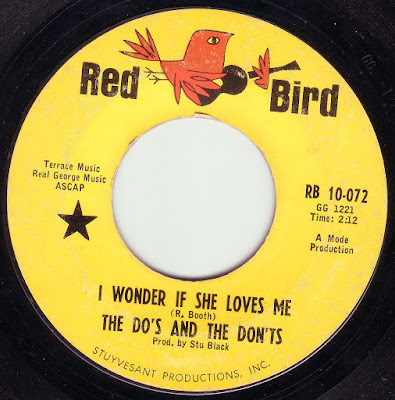 The Do's And The Don'ts are from Cedar Rapids, Iowa and had about seven 45's released in the mid 60's and possibly into the 70's. Although I can confirm this 45 was released in July of 1966, they had six on the local "Zorch" label that I can't be certain of. This has a nice "teen" vibe to it, nothing crazy, just very nice mid-sixties pop. These guys are still playing oldies in the Cedar Rapids area. 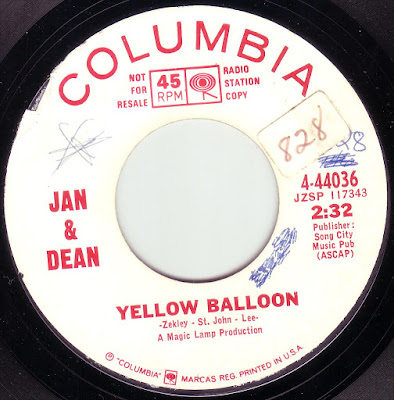 Real good psych-pop effort by Jan & Dean here, their only record on Columbia and is actually just Dean Torrence solo as Jan Berry was recovering from his near fatal car accident. This is the original version written by Gary Zekley and apparently he didn't like the Jan & Dean treatment so he shopped it off to Canterbury Records who got some session musicians to record it and it became somewhat of a bubblegum hit in 1967. 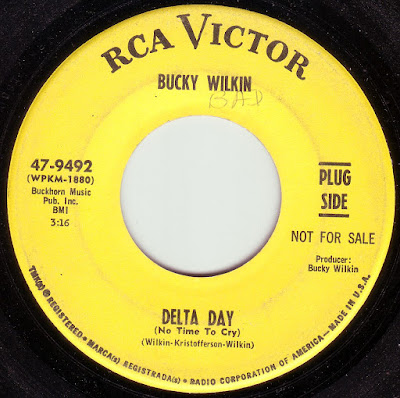 I really had a hard time deciding whether to post this 45. Although I like it, it doesn't quite fit well with the general theme of this blog, but it's not the first time I've gone astray so-to-speak so I figured what the hell. John "Bucky" Wilkin was most famously known as "Ronny" of  Ronny & The Daytonas who we all know had a big hit in 1964 with "G.T.O.". This 45 on the other hand is a studio concoction and  a sort of protest song as well with it's Vietnam War theme and seems to be co-written by Kris Kristofferson. The flip, on the other hand, is a very nice version of "I Wanna Be Free". 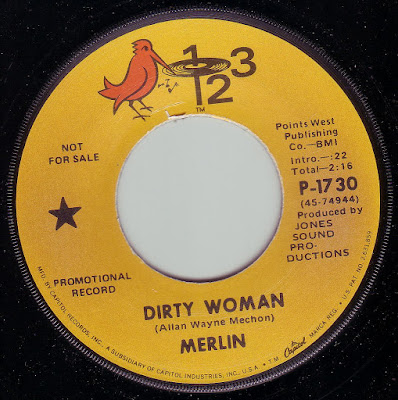 I'm having a hard time finding ANY concrete info on this act, although a blog from Hungary did post this and offered up a bit, although the translating through Google is rough. It seems these guys were from Houston, TX and offered up this sole 45 on 123 Records in 1970. The 'A' side is nice bonehead cruncher heavy psych with lots of organ and the 'B' side is more like late sixties British psych/pop. Very nice. It also seems that keyboard legend John "Rabbit" Bundrick was in this band as he was also in a group called "Blackwell" that also worked with Jones Sound Productions.