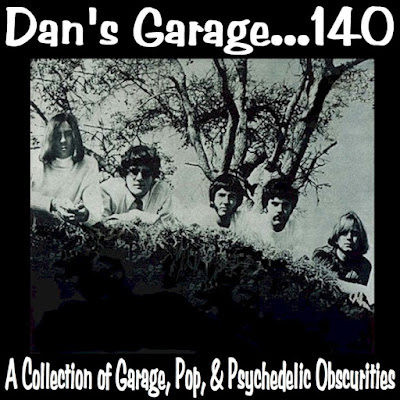 Greeting music lovers!!!! Glad to be here whipping up another post for you and getting it done in a timely fashion as well. I haven't got any rants today so I'll just get right to it by mentioning that #140 is another "mixed bag" of 45's as I grab unsorted handfuls out of boxes and start spinning them on the turntable. We've got some garage, blue eyed soul, pop/psych, and a rather amusing honky tonk tune for all you country & western fans.
I'd just like to mention again that "Dan's Garage" is also a radio show! We're streaming on the web @ Radio Free Phoenix on Wednesdays at 10:00 PM Eastern Standard Time, and we repeat the show on Sundays 2:00 PM @ Deep Oldies. Check it out, we're sure you'll enjoy it, and as if THAT isn't enough, we also have a YouTube channel, so you can hear music and imagine all those little platters spinning around on a turntable as well!
Oh by the way, if you'd like to listen to past shows you can do so at Mixcloud. Just a disclaimer here...I'm not a "pro" user so the functions are somewhat limited, in other words you can't FF or rewind and I believe the track list functions are limited as well. Not every single show from the past is there, but we're doing our best to keep up. That being said, you can listen at no cost and we think you'll enjoy it immensely.
Have fun out there, keep your cool and enjoy #140!
Flying Circus - I'm Going / Midnight Highway (1967) 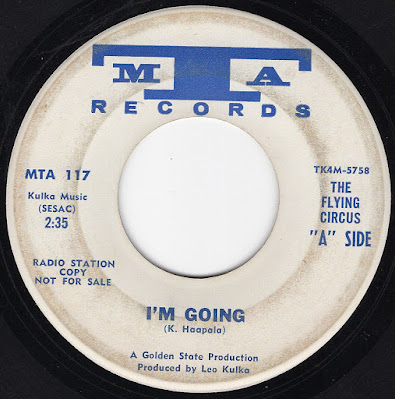 Pretty crude stuff on the A side for 1967, this coming from a San Francisco group no less, who's music scene at the time consisted of The Gratetful Dead, Jefferson Airplane, Country Joe & The Fish, etc. The B side is somewhat more polished, but still quite "garagey". They would release two more on MTA records, the second is featured in IDG #78 and is more folk rock than garage.
Canadians - You Don't Love Me No More / You're My Baby (1964) 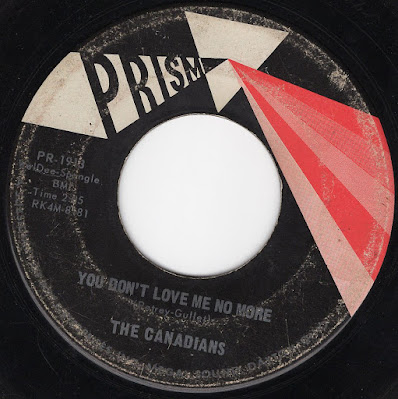 Prism Records out of Dayton, OH had a decent roster of acts that went from country to flat out garage/punk. Last post featured The Fink Muncx IX, a classic for sure, this time around we present a totally unknown band who are supposedly from Miamisburg,OH just outside of Dayton. Great teen garage here.
Bobby Carey - Ain't That Too Bad / It's All Over (Except The Cryin') (1967) 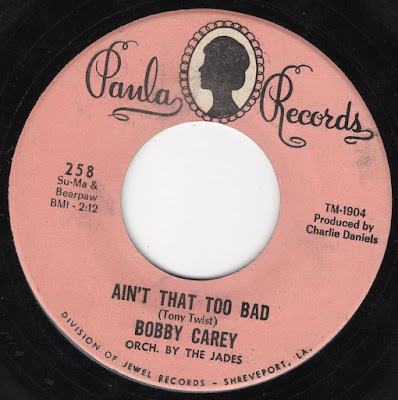 Here's another dead end. Don't know much about Bobby Carey, or The Jades, or "Tony Twist" for that matter (although there is an NHL player by the same name). All searches for "Bobby Carey" turned up a lot of pics of "Mariah Carey", so the only thing I can get out of this is that it was produced by a younger Charlie Daniels, who would go on to fame and fortune with his country rock act. This was one of those records that was listed as "garage" by a seller I buy from often, but as you will hear, this is definitely what most of us would call "blue eyed soul", not that that's a bad thing, in fact, I like this record a lot which is why I included it.
Matthew Moore - Come On / White Silk Glove (1967) 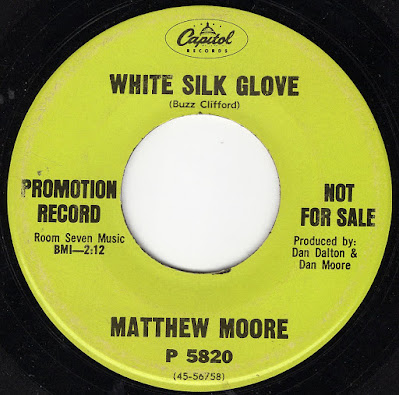 Matthew Moore had several 45's on a few different labels but outside of that I don't much about this guy either. What I did discover though, was that he had a somewhat close association with David Marks, ex-Beach Boys guitarist and they both went on to form "The Moon", a band that had a few 45's on Imperial records. He had a KILLER version of Buffy Ste. Marie's "Codyne" in 1965, but I'm afraid this one falls a bit short of that one. This 45 is definitely what I would describe as "mod" for lack of a better description. It moves along quite well with some fuzzy guitars and a few horns as well. Not bad.
Raves - Mother Nature / Mister Man (1967) 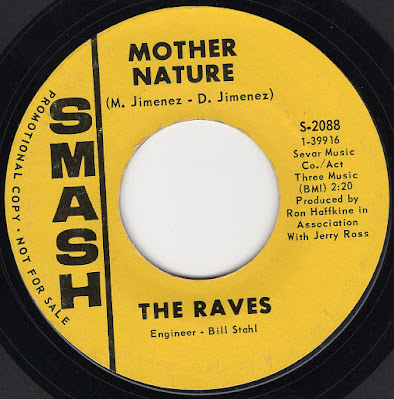 Oooh Oooh, as one my heroes Gunther Toody would say...here's a real good one! The Raves were from Brooklyn, NY, and unlike their contemporaries from the tri-state area, they didn't go for the "Rascals", "Vanilla Fudge", "Vagrants" style with a heavy Hammond B-3 organ sound, they were a lot more like The Blues Magoos. This 45 is pretty genius if you ask me, and the somewhat complex arrangements are pretty cool as well. Great guitars, wild cheezy organ riffs, it's a great example of a garage/psyche two sider. I hesitate to even brand these guys as "garage" because they sound so professional. They had three 45's on Smash, the first is pretty much what you hear on this one and it was featured in IDG#4. Their last one "Everything's Fire" is really good as well, but heads in a heavier direction and had some horns thrown in as well. Oddly enough that last one is the most "desirable" of the three, but I think it pales alongside this one IMHO.
Circus Maximus - Lonely Man / Negative Dreamer Girl (1967) 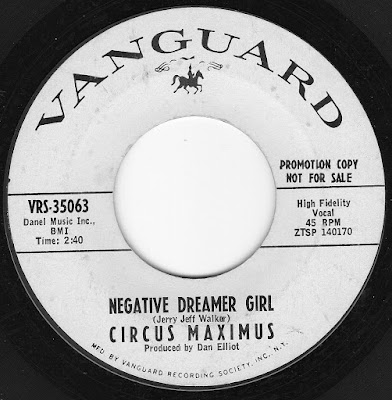 A group out of Austin, TX that included Jerry Jeff Walker, the guy who wrote "Mr. Bojangles". This group is not exactly 'The Nitty Gritty Dirt Band", but a pretty good psychedelic outfit. Circus Maximus released two LP's but only this one 45.
Fever Tree - Girl, Oh Girl (Don't Push Me) / Steve Lenore (1967) 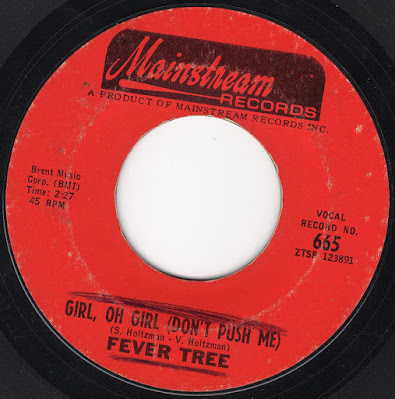 The Fever Tree were most famous for their song "San Francisco Girls", a timely masterpiece of psychedelic pop. Hailing from Houston, TX, they began their career with a couple of 45's on Mainstream Records (Janis Joplin was from Port Arthur, a mere stone's throw away and Big Brother & The Holding Co.'s first LP was released on the same label), moving on to Uni and finally Ampex in the early seventies. Both sides of this 45 are laid back and on the bluesy side.
Human Touch - Sally Go 'Round The Roses (1969) 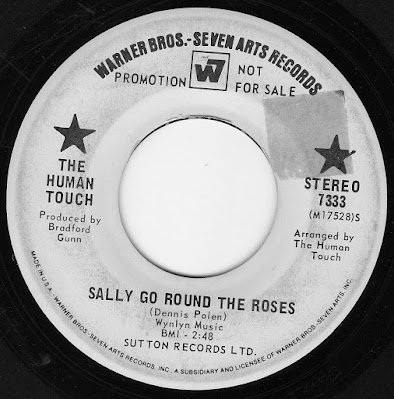 Here's a song that I know a little bit about, but trying to get solid info on The Human Touch has been a kinda rough. The song was originally sung by The Jaynetts, who everyone describes as a "one hit wonder". I personally hate that term because although many groups throughout the history of Rock & Roll, R&B, Soul, etc. have had only "one hit", quite often you'll hear a body of music that is sadly overlooked, but I digress. The Great Society which featured a pre-Jefferson Airplane Grace Slick, performed this song live at The Matrix and was released on a 45 by Columbia Records. This version is quite similar with it's haunting eerie vibe. An excellent 45 if I do say so!
Meditations - Transcendental Meditations / Beautiful Experience (1967) 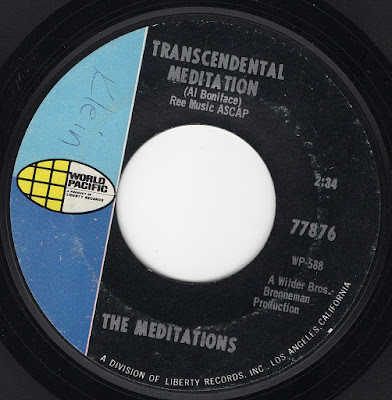 Well...I told you this was going to be a mixed bag, and this 45 really takes things in another direction entirely. Probably a studio group, The Meditations were definitely cashing in on the good vibes and karma from the summer of love and produced this syrupy sweet pop/psyche number. Perfect for a summer evening and a bottle of white whine.
Noel Deschamps - Ah, Si J'Avais Pense / On Se Moque De Toi, Laisse Dire / C'est Pa La Piene / Curieux Doctueur (1966) 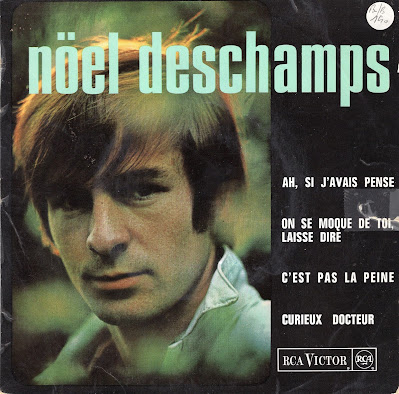 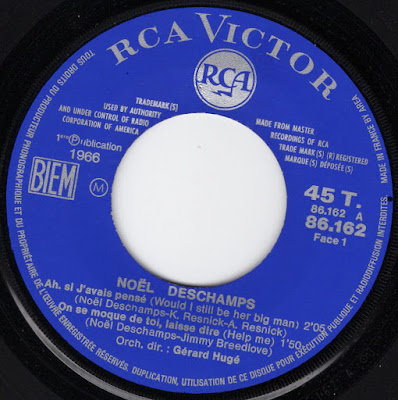 A few months back, I took in a decent haul of very good deals on Ebay that included three French EP's, and several import singles as well as a bunch of other way cool stuff that I'll be featuring in the future. Of the three French EP's I aquired were two by Noel Deschamps who, from what I can estimate, was was a very popular singer in France. Although some might think these are a tad bit overproduced, perhaps because he was such a big pop star, they're actually really cool. Two of these tracks are really decent covers, one of The Brigands classic punker "Would I Still Be Her Big Man", and a cover of John Mayall & The Bluesbreakers' "I'm Your Witchdoctor". The other two songs are great as well. I have another one of these by Noel which I will feature in a future post. Stay tuned.....
Lyterside - Love Is A Game / Yesterday's Highway (1970) 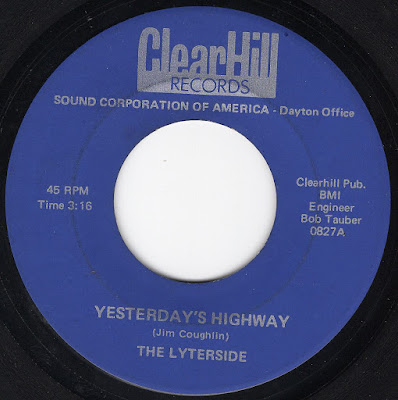 The Lyterside was basically a lounge duo from Dayton, OH that released this 45 and a "live" LP both on ClearHill Records who's most "famous" 45 was The Cranberry Mustache's "Far From Home", an excellent psychedelic 45 from the early '70's that sounds a lot like something from the 1960's. This 45 is OK, and I'm only including it here because of it's cheezy lo-fi sound. This 45 certainly has the same vibe as the Cranberry Mustache's 45 and so like a lot of the 45's of this nature, it grew on me.
Neil MacArthur - It's Not Easy / Twelve Twenty Nine (1969) 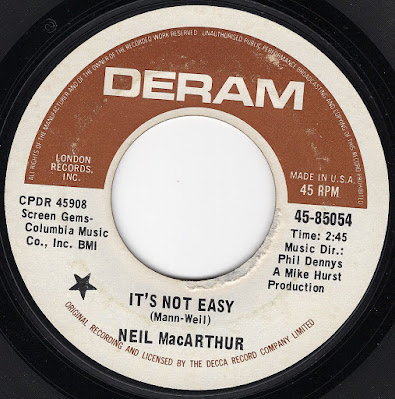 Here's one of those 45's I got in my recent haul of way cool records. My wife and I were trying to find cool things to watch on Netflix, I myself am happy to watch reruns of The Saint and Columbo, but my lovely wife likes something a bit more, "engaging" and she definitely hates shows in Black & White. I had heard that the Netflix series "The Queen" was very good so we commenced watching it and we were both sucked in, HEAVILY. So, at the end of one of those episodes while the credits were trailing off, a version of "She's Not There" played. I was suddenly intrigued and discovered that it was a post Zombies Colin Blunstone with the nom de plume of "Neil MacArthur". I swear I am a HUGE Zombies fan, and I think Colin's voice is one of the most unique in the history of rock & roll, so I set out looking for his post Zombies, pre-solo career work. It turns out he had three 45's on Deram as Neil MacArthur so when two came up for auction I jumped right on them, and although they are very well produced POP 45's, Colin's voice is unmistakable, so I basically consider this an extension of the Zombie's legacy.
Little Bob Story - All Or Nothing / Hot And Sweaty (1977) 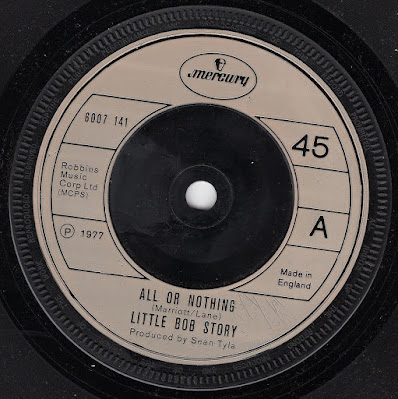 Little Bob a/k/a Roberto Piazza, was the bandleader of Little Bob Story, a way cool band from the mid to late 70's which for lack of a better description, were a "pub rock" band from France. I have one of their 12" EP's on Chiswick which is one of my favorite records ever, but when I came across this 45 I had to nab it. A side is a cover of a very good Steve Marriot era Small Faces song and the B side is great as well.
Ernie Hoppe - I'm A Loser (1970) 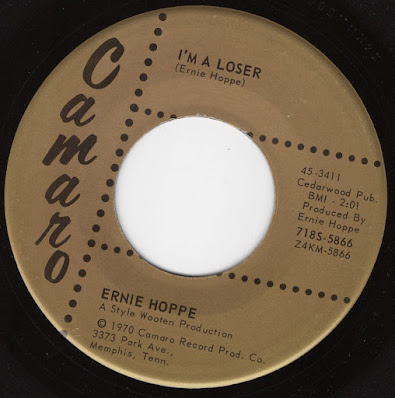 I warned you. This was going to be an "eclectic" roundup of 45's for this post and this one's the icing on the cake. As of late, I have become a big fan of "Honky Tonk" style Country & Western music. My favorite right now is Porter Waggoner, and everything that falls into that wheelhouse. So when someone has a half dozen really obscure 45's like this at a very cheap price, I jump on it immediately, so I received this lot 45's from the famous "Camaro" label out of Memphis, TN. If you haven't been there, you ought to go (wait for this carona shit to go away, you don't want to be visiting in masks and all that crap) it's a cool town. Visit Beale Street, Pig BBQ, The Sun Studio, The Stax Museum of Soul, and Graceland. It's worth it. Seriously, you smell BBQ when you get off the plane. Anyway, Camaro records was based out of Memphis, and they had a somewhat diverse roster of acts, including Ernie Hoppe here who performs a very cool rendition of The Beatles' "I'm A Loser" and takes the writing credit himself to boot!!!! He probably thought that his fans had never listened to a Beatles record in their lives, so he figured he could probably get away with it. GOTCHA ERNIE!!!!!!
HERE
UPDATED COVER
Flying Circus - Midnight Highway
Posted by Dan at Friday, November 13, 2020 28 comments: