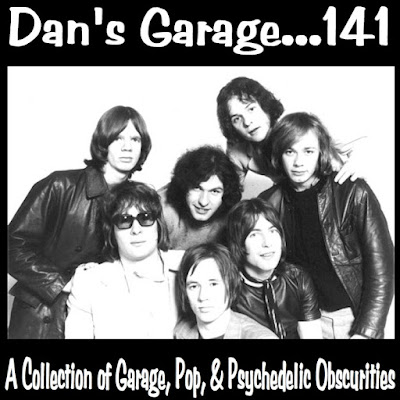 Greetings music lovers!!!! Welcome to 2021which will hopefully be a busier year than last as far as posts on this here blog are concerned. Sorry for the sloppy mess I left on the last one. Bad scans, incomplete files, not exactly up to scratch as the QC dept. here at Dan's Garage Central fell asleep at the wheel, but hopefully we'll make amends this time.
I hope everyone had a great holiday this year as ours's was somewhat modified given the number of guests we were "allowed" to have at one time. Nothing that a little bit of surf 'n turf wont take care of!!!! That being said, all was fine and we hope yours was as well.
Records have been trickling in slowly these past few months, but we still have many untapped resources, so let's get right to it with NUMBER 114!
UPDATE!
For those of you who are still asking to update dead links, #1 through 85 are  HERE and #86 through 131 are HERE.  Every post beyond that should have a working link. These are for the Dan's Garage posts only. If you're looking for re-ups of "Obscure 60's Garage", I'll get to them when time permits. Sorry, I have no re-ups for the "Best Of" posts. Those were one off things I threw together and unfortunately, they were lost when my hard drive crashed a while back. Thanks for all your patience and kind kind comments. Stay tuned for more!
John Chester & The Chessmen - Bye Bye Johnny / Miss Ann (1964) 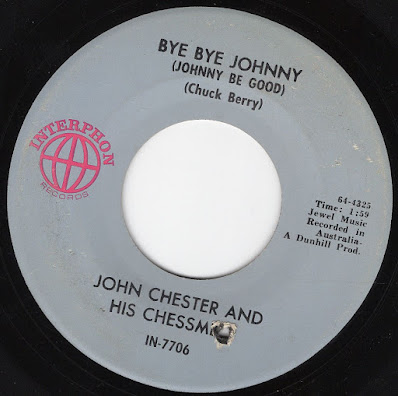 I was fortunate to pick this one up for real cheap a year or so ago, not knowing exactly what I was going to get, but I've had a lot of luck with stuff on Interphon, which seemed to be a label that specialized in acts from the U.K. and Australia, like this one here. Noteworthy groups on this label include The Takers (AKA The Undertakers), The Ad-Libs, The Groundhogs, The Soul Agents, and their biggest act, The Honeycombs. John Chester was one of the first rock & roll artists to hit it big in Australia, and although he released seven 45's in Australia with the Chessmen, he managed only one up here in the U.S.
Fabulous Four - Now You Cry / Got To Get Her Back (1966) 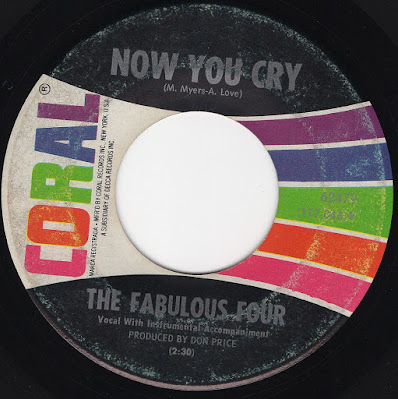 The Fabulous Four were a very popular group out of Kansas City, MO that started their career off in the early sixties and went well into the seventies. This is their first 45 originally released on the local Brass label and was picked up by Decca for release on their Coral subsidiary. They released other records on Brass simply as "The Fab Four", changed their name to "Next Exit" for a release on Warner Bros., went back to The Fab Four for a one shot on Pearce, and ended up releasing a 45 as "Kansas City" on The Trump label (no relation to the former Pres.). In all, their output was really good, especially their second 45 on Brass, "I'm Always Doing Something Wrong", one of the great teen garage janglers from the mid sixties. This 45's is no slouch either as the A side is a rather moody garage ballad, and the B side is some of the finest Garage/Pop to come out of the 1960's.
Sounds Like Us - Clock On The Wall / Outside Chance (1966) 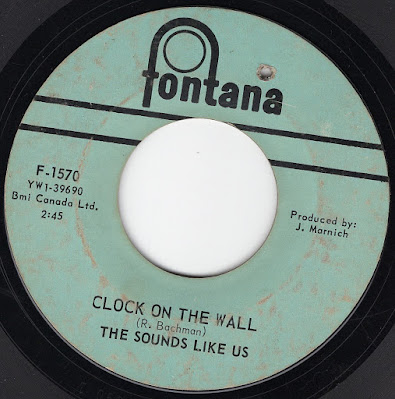 Apparently from Duluth, MN, these guys decided to cover two of the era's better songs, The Guess Who's "Clock On The Wall", and The Turtles' "Outside Chance". Personally, I think these versions are the superior ones, ONLY because I heard these first. I especially love their take on "Outside Chance" which is the version that The Chesterfield Kings most likely used as a template on their first LP (a classic IMHO). They had a second 45 on Soma which was a version of  Frank Sinatra's (or the Kingston Trio's, take yer pick) "It Was A Very Good Year", backed with a crazed psychedelic instrumental called "The Other Side Of The Record".
Long Brothers - Lonely Time / Dream Girl (1966) 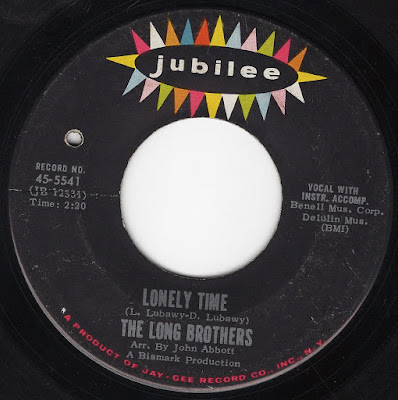 You know, I coulda swore I had some concrete info on these guys at some point, but in the fickle universe called "psyberspace" (did I spell that right???), things appear and disappear randomly, so I'm gonna wing it with my feeble memory as my only notes....
The Long Brothers were actually twin brothers from I really don't know where, but they left us with this cool single, a two sider that features a moody ballad on the A side that has a riff reminiscent of  "And I Love Her" but mucked up by a lousy horn section. The B side on the other hand is the winner here. Great cheezy garage/folk/punk with an up-tempo delivery!
Thomas Edisun's Electric Light Bulb Band - The Circle Is Small / Flying On The Ground (1969) 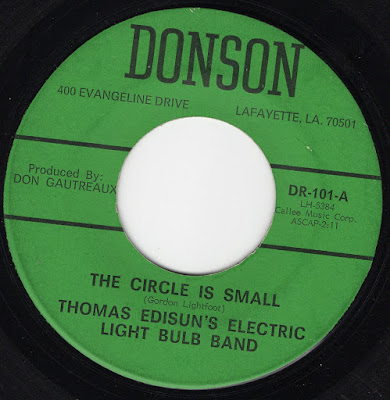 Thomas Edisun's Electric Light Bulb Band was a group out of Lafayette, LA and had two 45's, one on Tamm records and the other here on Donson, both local labels. I don't know a lot about this band's history, but they probably were ridiculed quite a bit as 1960's Louisiana, outside of NoLa was pretty conservative, and since these guys were, let's just say, "slightly psychedelic", they may have taken quite a bit of flak from the locals. This is just pure conjecture here, because I wasn't there, but they did leave us with a couple of cool 45's including this one which is another double two sided cover record. A cover of a Gordon Lightfoot song (that I've never really heard), and a slow, loopy cover of Neil Young's "Flying On The Ground Is Wrong", a rather popular song in the late sixties covered by more bands than I can mention here.....
Amen Corner - High In The Sky / Run, Run, Run (1968) 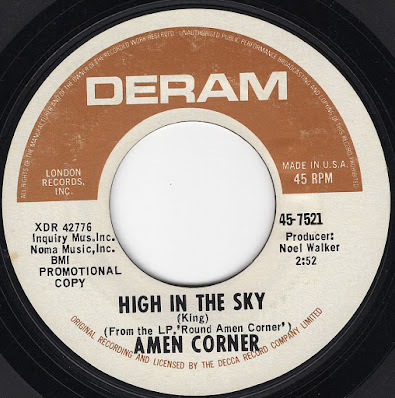 Amen Corner was a really good mod/r&b/psych outfit from the U.K. that only had four releases in the U.S., three on Deram and one on Immediate. It was led, more or less, by vocalist Andy Fairweather-Low who had a decent solo career in the seventies performing with the likes of Eric Clapton, George Harrison and others, and keyboardist Blue Weaver spent some time with Mott The Hoople, Strawbs, and other bands. Their singles are really very good and worth seeking out as they have a nice mix of psych, r&b and mod.
Buffalo Nickel - I Could Be So Good To You / Hard To Be Without You (Dome) 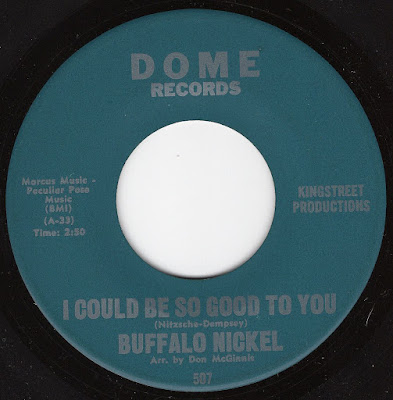 Holy moly! These guys had to call themselves "The Buffalo Nickel" and release a relatively obscure 45 on an even more obscure label, so in this space age of interwebs and ggoooggling you know what I get??? A lot of info on buffalo head nickels. I'm pretty sure these guys were from California although I can't confirm that, but they do a nice job with Don & The Goodtimes' "I Could Be So Good To You", but the B side "Hard To Be Without You" is the winner here.
Depoe Drifters - Sweet, Sweet Love / Soul On Fire (1969) 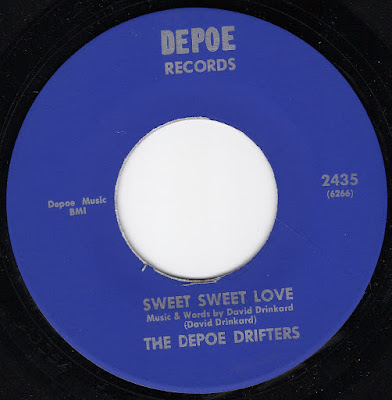 Here's one that I would assume is from somewhere in the deep south. Perhaps Tennessee or Mississippi, or Alabama?????? In any case, it's release date is 1969 which is pretty late for a lo-fi number such as this, not that that's a bad thing mind you. While everyone else was going "progressive" The Depoe Drifters managed to press a way cool 45 in the midst of all the change in styles. The A side is a great moody number and the B side is a haunting instrumental. Great stuff!!!
Hamilton Streetcar - Wasn't It You / Brother Speed (1969) 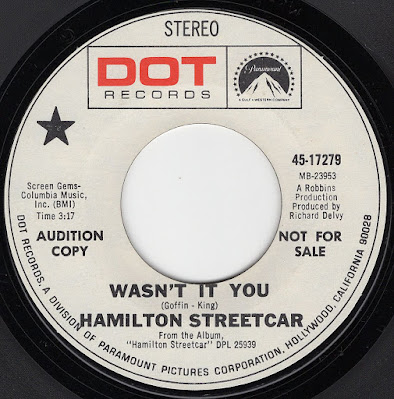 Hamilton Streetcar was a group out of L.A. that had two classic 45's on LHI Records and then released an LP on Dot in 1969. The first two 45's are premium examples of west coast psychedelia ca. 1967 and are classics, they later hooked up with producer Richard Delvy and released an LP of decent material, although it's somewhat overproduced in comparison to their earlier 45's. "Wasn't It You" is a song that was originally recorded by Petula Clark (I believe) and covered by a slew of other acts including these guys. The better side is "Brother Speed" a nice up-tempo psyche tune.
Captain Freak & Lunacycle Band - 20th Generation Sad / What Ever Happened To Superman (1971) 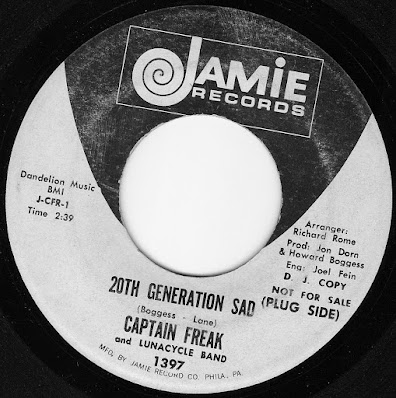 Not much is known about this kooky novelty tune from 1971. Not garage or psychedelic, this particular 45 was also released on the "Phil-La-Of Soul" label the same year. Co-producer  and writer Howard Boggess also released a slightly different version of "20th Generation Sad" as a solo artist on Jamie 1396 with a much better flip. This guy sounds a bit like Randy Newman to me.
The Fox - The Astrology Song / The Man, The Man (196?) 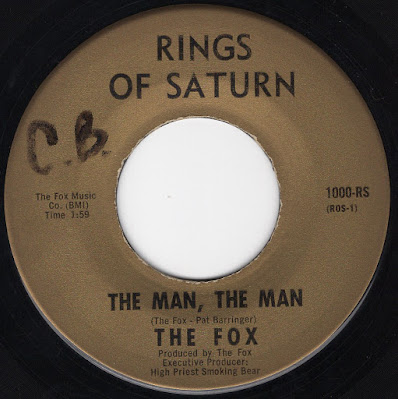 Here's another total dead end in the info dept. This 45 is another, well, sort of, "novelty" record, but I'm not sure it was intended to so. But I might be wrong, I think these guys were just really stoned. I have no idea who "The Fox" was but he probably cut this garage/psychedelic two sider sometime in the late 60's, possibly the early 70's, but judging by the way it sounds, I'd say....1969! "The Astrology Song" is a rundown of all the signs of the zodiac he's encountered, and the Fox explains all their diverse thoughts, or something like that. The flip, or the actual "A" side here is even better as The Fox warns all of us about "The Man", the "fuzz" to be exact going around town looking "for someone to bust" all sung to a Bo Diddley beat with some cool B-3 organ and bongos in the mix. I probably should mention that this was released on the "Rings Of Saturn" label and the "executive producer" was "High Priest Smoking Bear". Far out man!!!!
Wild Cherries - Wigwaum / Whistle Stop Revue (1971) 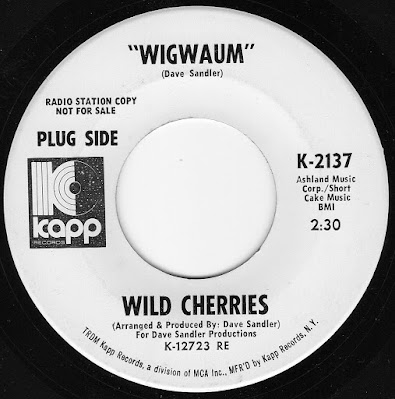 Some very nice bubblegum out of Iowa. "Wigwaum", is ok, typical bubblegum stuff from this era, but the flip is way cooler and probably represents what the band really sounded like. One of the last 45's released by Kapp Records before they were absorbed by MCA along with Uni, Decca, Coral, & Brunswick.
Yellow Payges - Vanilla On My Mind / Would You Mind If I Loved You (1969) 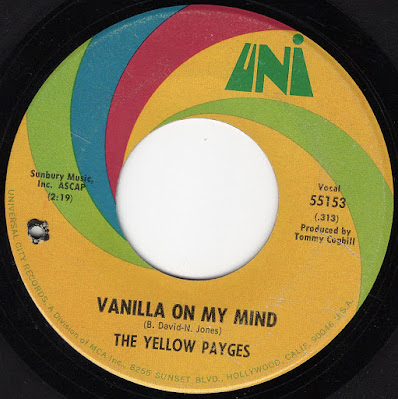 The Yellow Payges released a bunch of 45's on Showplace and Uni records in several different styles. Garage, Psychedelia, Flower-Pop, and just plain ol' "Pop" like this finely crafted two sider. I know all the "garage" and "psychedelic" purists may pooh-pooh this record, but I think it's really fucking good. Especially "Vanilla On My Mind". I'll say it again...A good song, is a good song, and "Vanilla" is right up there with them.
Keef Hartley - Waiting Around / Halfbreed (1969) 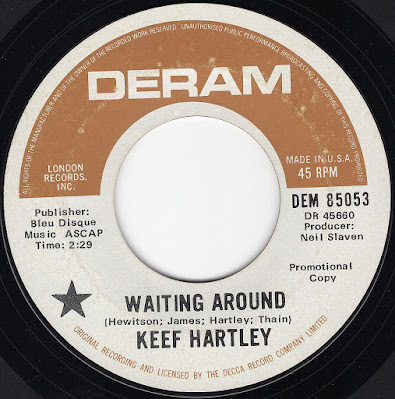 The focus of this blog consists almost entirely of garage, freakbeat, British invasion, surf, sunshine pop, bubblegum, etc., but I really do love "British Blues" from the mid to late 60's. I'm not talking about groups like The Animals, Them, The Yardbirds, Rolling Stones et al, I mean Ten Years After, Chicken Shack, Savoy Brown, John Mayall, and on this here 45, one of his drummers, Keef Hartley. Hartley split with Mayall around 1967 or 68. He played on Mayall's "Crusade" LP which I think is one of the finest examples of British Blues pressed on to vinyl (Mayall's LP with Eric Clapton is way better though ;)). After his departure, Hartley formed an act quite similar to The Bluesbreakers and featured a few of Mayall's former sidemen, so when this 45 became available at a very nice price, I took a stab at it and was pleasantly surprised. It's "British Blues" at it's finest. Guitarist Miller Anderson shines on this and he would later team up with Kim Simmonds and Stan Webb (of Chicken Shack) and record an LP as Savoy Brown called "Boogie Brothers". I used to have most of Keef Hartley's LP's and sold them off in the mid 80's. Right now, I kinda wish I had those records back.
HERE
Posted by Dan at Friday, January 22, 2021 16 comments: