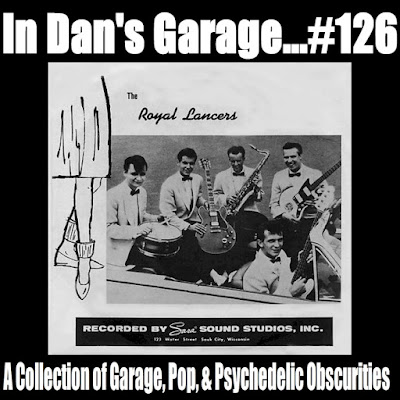 Greetings music lovers!!! It's great to be here again with another offering for all of you. The last three months have been pretty hectic with a big wedding and a nice little getaway to Jamaica at the beginning of this month. All went well, and having some much needed r&r was a big bonus.  Another big bonus is the euphoria I'm feeling right now as my beloved New York Giants finally won their second game of the season after looking positively atrocious the last four or five games (or maybe it was six I really lost count). In any case their season is lost but a win is a win, I guess.
I hope all of you are checking out the "Dan's Garage" radio show which airs every Wednesday & Sunday.  It airs at 10:00 PM EDT on Wednesday @ Radio Free Phoenix and at 2:00 PM EDT on Sundays @ Deep Oldies.
Records are really piling up over here at Dan's Garage Central, so if anyone is wondering whether I'll run out of steam here, I ain't gonna happen in the foreseeable future because
my turntable is fired up, my needles are sharp and we are loaded for bear!! YEEEHAAA!!!! Seriously though, I've noticed the price of decent stuff on Ebay has ballooned in the last year and I think there are a handful of relatively wealthy collectors out there snatching up anything they can and bidding top dollar for what used to be, or at least what I thought used to be somewhat cheap items. Things that usually sold in the under $10 range are fetching upwards of $30. I won't get specific because there are so many examples but these are the hazards of collecting vinyl. I do get lucky here and there and I pick my spots, but I think it's time to start heading for record shows again and stopping at every garage sale next spring and summer. (Hey! You got any records or musical instruments???)
Some random thoughts.....
I've been listening to a lot of Country music lately. Not the garbage that you hear on the radio these days like Florida/Georgia Line, or Kenny Chesney, or Jason Aldean, or whatever. But the real stuff. Buck Owens, Hank Snow, Hank Williams, Kitty Wells, Connie Smith, Merle Haggard, Red Sovine, and my personal favorite of late, Porter Waggoner. There's a cable station we get called "Rural TV", and they show real farmer type stuff like the weather for growing corn and wheat with one of those ticker things at the bottom of the screen showing what hogs and cows are going for on the commodity markets and things like that. They show Hee Haw once I week, but my DVR is firmly set to record "The Porter Waggoner Show" which airs every Friday night. I remember this program when I was much younger as it aired every Saturday somewhere around 7PM probably just opposite of The Lawrence Welk show,and I distinctly remember Porter's big slicked back hair, and those cool Nudie suits that he and "The Wagon Masters" used to wear. I tell you what, those are some of the finest pickers ever to grace yer TV set, and let's not ferget ol' Dolly Parton in her younger days, with that bouffant hair-do and the gold boots. Yeah, she was a real looker back then and she could sing her ass off. YEEEE HAAA!!!! Speaking of TV, since there's so much garbage polluting our air waves these days, it's real hard to find something good to watch. I have two of the more popular streaming TV services (I won't name them because I don't want to give them any free advertising) and they have some cool stuff available, but I consistently find myself clicking the remote to MeTV, a station out of Chicago that shows really decent retro TV programs every day. Among the great shows are re-runs of Leave It To Beaver, Batman, Star Trek, Petticoat Junction, The Honeymooners, The Untouchables, The Wild Wild West (one of my personal faves), Svengoolie, a kooky horror movie host that shows a good flick every Saturday night, and one of my new obsessions "Highway Patrol".
Highway Patrol was a half hour show from the late 50's that was similar to "Dragnet", that starred Broderick Crawford as "Dan Matthews" the curmudgeoney head of the highway patrol that we'd assume to be California, but they never really say what state they're the highway patrol of. Unlike Dragnet, where you always kind of root for Joe Friday and Bill Gannon to get their "man", usually some sad sack or drugged out hippie, in Highway Patrol I find myself rooting for the bad guy mainly because Mathews is such a dick. I constantly find myself rewinding the show because Broderick Crawford talks so fast and slurs his speech so much, that I can't understand what he's saying half the time. He reportedly was drunk most of the time to the point where they wouldn't let the guy drive on the set. If you get a chance to see this show, please do. It's a hoot. I'm pretty sure episodes are available on You Tube.
OK, now that I got that off my chest, we can go on to this post which, as usual, is a veritable cornucopia of cool sounds from the early sixties through the early seventies. I wanted to get this one out before the Thanksgiving holiday and I hope to have another one on the way before Christmas. So on behalf of me and all the staff here at Dan's Garage...HAPPY HOLIDAYS!! See you soon! 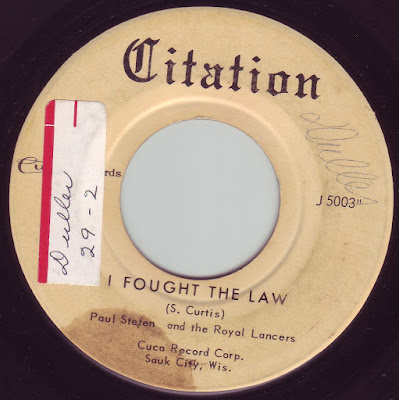 This group from Milwaukee was one the first to cover this Crickets tune, about a year or so before Bobby Fuller released his version on Exeter records, and a good 2+ years before The Bobby Fuller Four had a huge hit wit it in 1965. This apparently was somewhat of a minor hit in the region. It's a decent version with some cool guitar work, but lacks the punch of Fuller's hit. 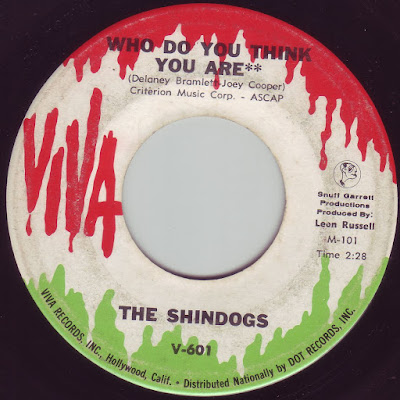 The Shindogs were the house band for the show "Shindig!" which aired on ABC from 1964 to 1966. This 45 features a young Delaney Bramlett on vocals (I presume) as well as the cream of the "Wrecking Crew" crop like Glen Campbell, James Burton, Larry Knechtel, and of course Leon Russel producing the whole shindig. No pun intended........ 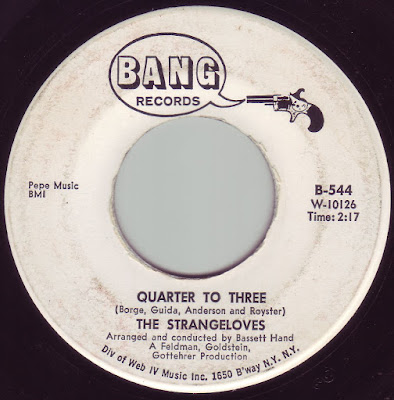 Their last release on Bang, this is a good two sider and a pretty spirited version of "Quarter To Three" (which is actually the 'B' side). The flip is basically a rework of "I Want Candy". 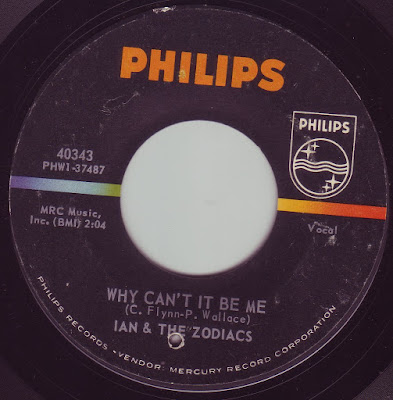 Here I go again featuring the 'B' side again, but in this case, "Why Can't It Be Me" is clearly the superior song, and definitely their best IMHO. They would release a couple more 45s into 1966 and then call it quits. 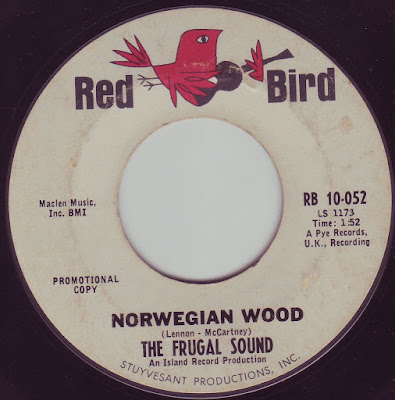 Basically a folk group much like The Seekers and The Silke, The Frugal Sound released five 45's in the UK but managed to only get this one released in the US, a folky rendition of The Beatles' classic. 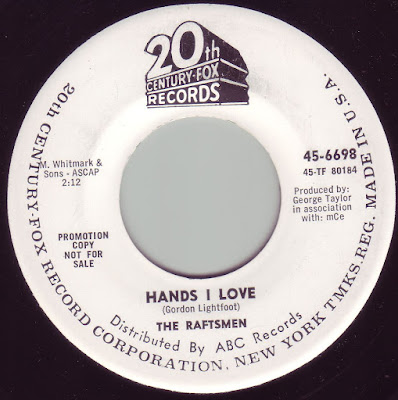 Another folk group, this time from Canada. This is a somewhat poppy affair where they cover a Gordon Lightfoot song on the 'A' side. Not bad. 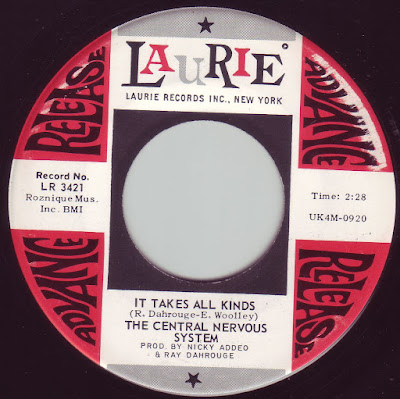 Trying to get some concrete info on this group turned up a dead end on the web, but this is a really good garage/psych two sider with some nifty organ work. 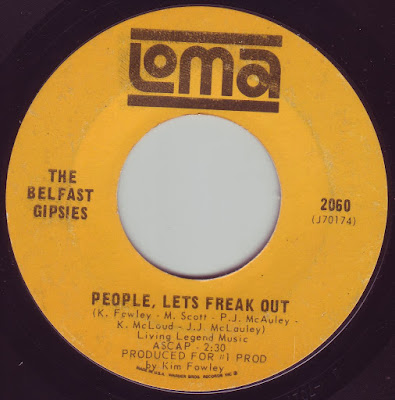 The second of two 45's they would release in the US. I'll avoid the rather complicated history of this group and their ties to"Them", by just saying that both of their records are really freaking good and should be sought out. "People" is a frenzied take on the "Bo Diddley" beat and "Portland Town" is a great melancholy folk rocker. A+ all the way. 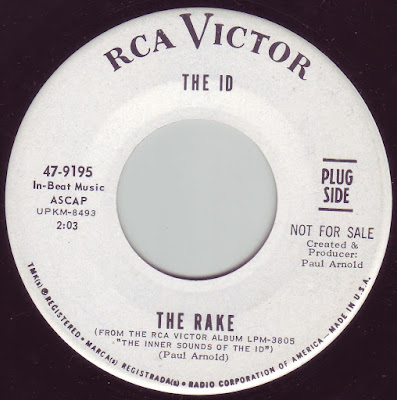 The follow up to the classic "Boil The Kettle Mother" and it does not disappoint. "The Rake" has some great guitars with a cool start/stop tempo and the flip is very good as well. This group's guitarist was Jerry Cole who was also in The Champs. From San Diego, CA. 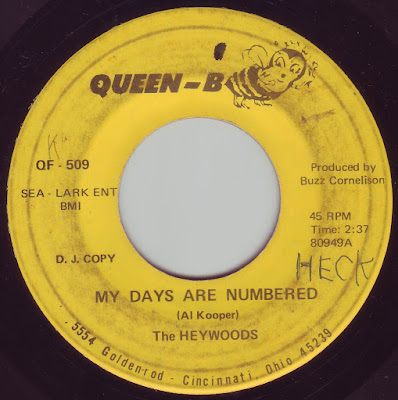 The 'A' side of this 45 is a good cover of an Al Kooper song and the 'B' side is a very good version of Donovan's "Season Of The Witch". The Heywoods were a very popular act in Cincinnati, OH where they released several 45's locally, then they got picked up by ABC records, changed their name to "Bo Donaldson & The Heywoods", and had a huge AM radio hit in 1974 with "Billy Don't Be A Hero". I was in 8th grade at the time and remember it well...... 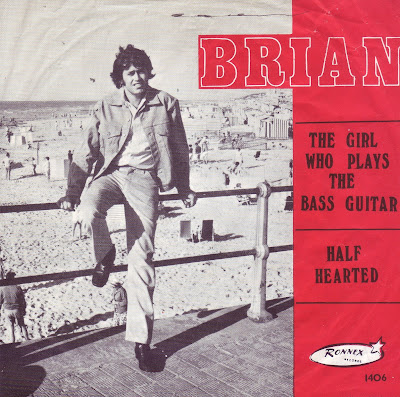 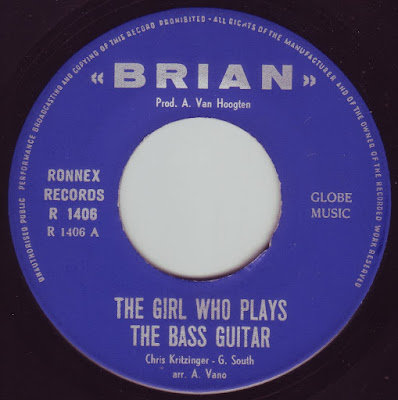 I'm not exactly sure who "Brian" was, but apparently he was pretty popular in Belgium because he released about nine different 45's and from what I gather (because I've never heard the others), they were in mostly beat/pop style. This is clearly a pop record, but it's not too shabby and the jacket is kinda cool as well as it also included sheet music for both songs! 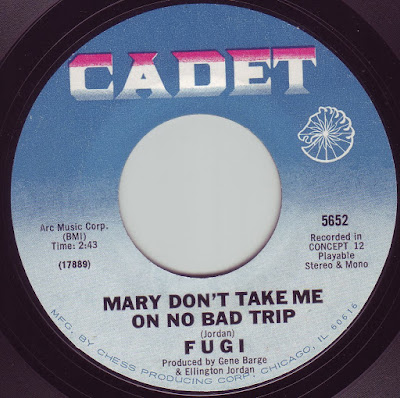 Fugi was actually singer songwriter Ellington Jordan, a guy who co-wrote Etta James' "Id Rather Go Blind". He teamed up with Detroit funk group Black Merda for this 45, a really cool blend of funk, soul, and psychedelia. 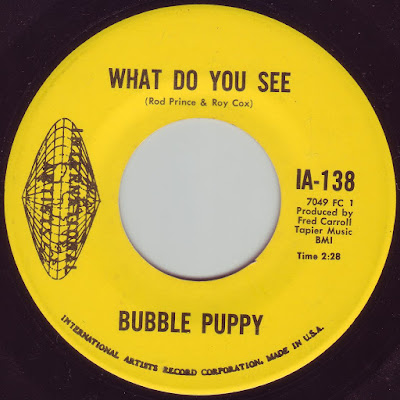 The last 45 released by these Texas legends before they changed their name to "Demian" and released an LP and one 45 on ABC records. 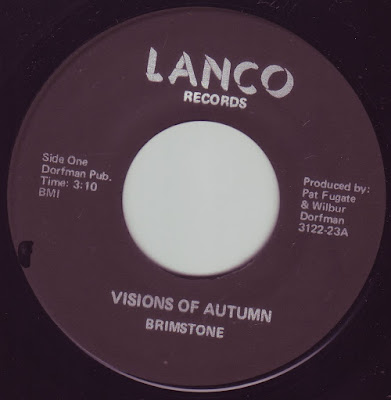 Here's a 45 that definitely ventures into "prog rock" territory with a predominant synth in the foreground, BUT, I really like the melodies and vocal harmonies on both sides of this 45 and if you eliminate the somewhat annoying synthesizer part, it's a very good if not excellent pop/psych record. These guys were from Canton, OH and had one other 45 but I've never heard it.