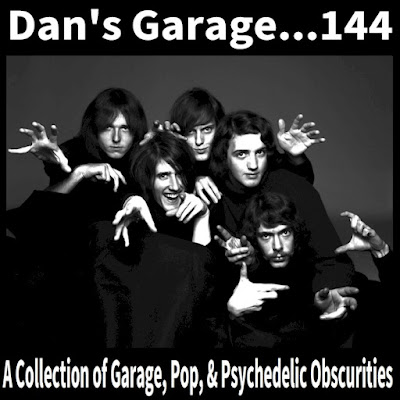 GREETINGS MUSIC LOVERS!!!!!!! It's been quite a while since I've last posted, in fact this could be the longest hiatus I've ever taken. Most of my time these day's are taken up with work, family (I have five grandchildren!), my weekly show on Radio Free Phoenix and Deep Oldies, and some health issues, while they are not life threatening, have been quite debilitating over the past two years. Fortunately, I'm seeing a light at the end of the tunnel and hope to be a complete functioning adult sometime within this year.
Enough about myself and the whiny violin music in the background. Record collecting these days has been hit and/or miss, but stuff does trickle in, in fact due to a good pay bump, I'm able to "waste my money" on some cool records. I've bought a lot of L.P.'s lately, filling holes in my wish list of albums that I had when I was younger and sold or lost, but I've also scored a few cool 45's recently, some of which are featured in this particular post., in fact I'm awaiting more in the mail as I write this!!!!
For all of you friends and followers out there, thanks for sticking around, and for any newbies out there, I hope you enjoy what we're doing here.
As usual, there's a "veritable cornucopia of fine 45's" to check out so let's get right to it!!!!
Legends - Here Comes The Pain / Don't Be Ashamed (1964) 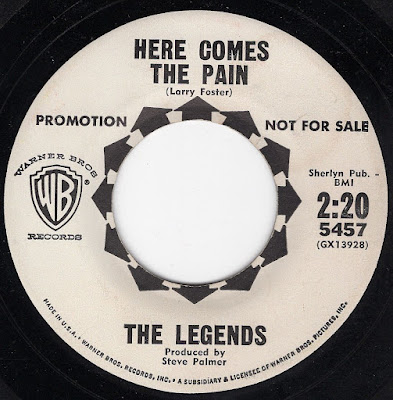 From Milwaukee, WI. The Legends actually released about 10 45's on various labels including Capitol, Parrot, Ermine (a local label), and Warner Bros. This is a great British Invasion influenced 45 that reminds me more of The Searchers, than say The Beatles. Great stuff!
Messengers - Hard Hard Year (1967) 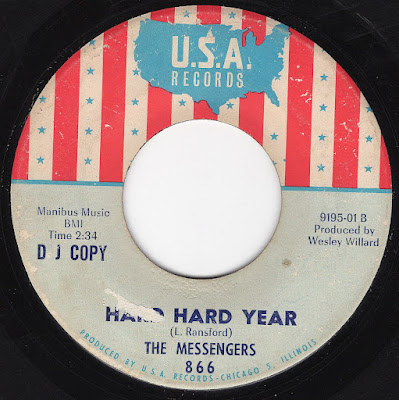 Another Milwaukee group. The history of these guys is somewhat convoluted, but if you follow this link...https://www.45cat.com/record/nc106961us, you may get some clarification on who they were and their history,. In any case, this is a cover of a Hollies song, something that I was totally unaware of until I did a little research because I still don't know ALL of my "cool" rock & roll history. Very cool stuff here...
Midnight Mail - I Can't Get It / I Can't Quit (1966) 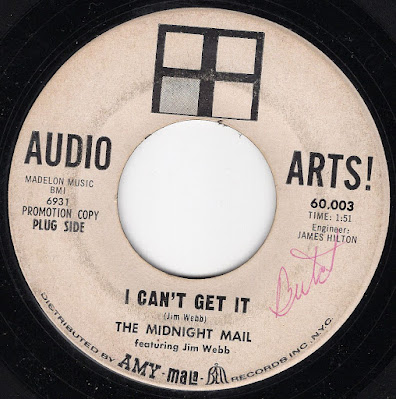 Jim Webb, also known as "Jimmy", wrote a slew of hits in the 60's and 70's, most notably "By The Time I Get To Phoenix, "Up, Up, And Away", "MacArthur Park" (ew), and worked quite a bit with Johnny Rivers. I guess this must've been a real early effort from 1966 although I don't see much mention of it except that the 45 states that it features him. I wouldn't exactly call this a 'garage' 45 but it's certainly some very solid 60's rock and roll with a little bit of attitude.
Bill Hjerpe - Navigation Blues / Not For Sale (1966) 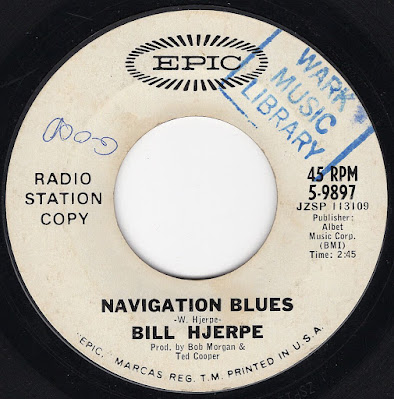 Bill Hjerpe released two 45's on Epic and somehow also worked as a songwriter for at least one act that I know of that appeared on Columbia Records. Those guys would be Rochester, NY's Show Stoppers who apparently were discovered in our humble hometown by John Hammond himself, well... discovered might be a stretch, but I think they generated enough interest to get him up here to see them perform and give them a contract. The Show Stoppers released two 45's on Columbia and were blessed with Bill Hjerpe's songwriting on both issues. Obviously, Bill has a Dylan thing going on here, and "Navigation Blues" sounds like Bill and the drummer going at it while he does a sort of stream of consciousness vocal much in the same way Dylan did, although I think Bob was more deliberate with his lyrics. "Not For Sale" is actually the better side as we have a full band backing Hjerpe up on that one. Also seek out is other Epic 45 which is well...EPIC!!!!
Tom Rush - On The Road Again / Who Do You Love (1965) 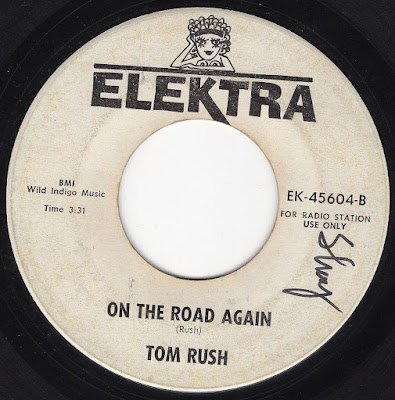 How many "On The Road Again" songs are there in the musical universe??? Prolly a bunch. We all know Willie Nelson's version well (yawn), and the Lovin' Spoonful had one,  there may be some others, but for my money this one by Tom Rush is the best. Tom Rush was not exactly a garage or psychedelic guy, on the contrary, he was a blues/folk artist. I don't know a whole lot about him 'cause the folk thing really isn't my bag, but I can't help loving this particular song. It reminds me a bit like Dylan's "Maggies Farm", but not quit as "out there", know what I mean? Who Do You Love is pretty good, but doesn't stack up against what is actually the 'B' side to this 45.
Reasons Why - Same Old Worries / I Don't Care If You Don't Care (1967) 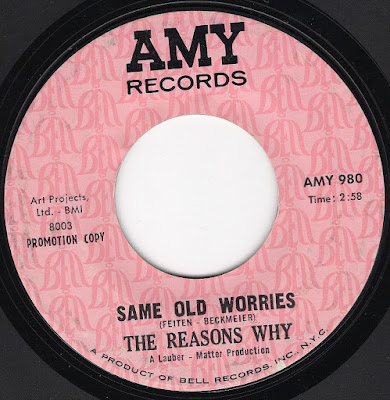 This was the last of three 45's released by this Long Island group that included Buzz Feiten who went on to play with guys like Paul Butterfield, The Rascals, and he invented a tuning system for guitar which I guess keeps everything in tune so to speak. The first two 45's were really good garage/folk rock, this one on the other hand, well...they make a serious left turn. One side is a very moody number, and the other is kind of baroque pop, at least it reminded me of The Left Banke on first play. "Same Old Worries" is definitely the standout track here.
Bystanders - Royal Blue Summer Sunshine Day (1967) 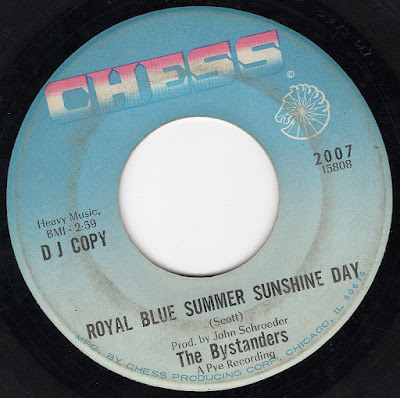 You know...I could never figure Pye Records out. Although they had some of the BEST music to come out of Britain in the 60's, here in the U.S., their releases got scattered about a bunch of different labels including this one which ended up on Chess no less. Chess, being the gold standard for blues labels in the 50's and early 60's needed to expand their horizons so they released 45's by groups like "The Lot", "The Truth", "The Baroques", and this one here, which by the way, is a one sided promo. The Bystanders were from Wales and in the UK released eight 45's including a version of Keith's "98.6". This is typically great British psyche/pop fun!
Mother's Little Helpers - Walk With Me / Funny Girl (1968) 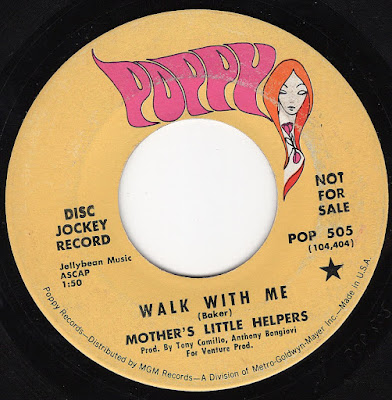 Can't say too much about this group. This one is firmly in the "Bubblegum" category with dopey kazoos, and the like. Probably a studio group. Sorry, but that's all I got.
Comstock LTD. - Annabelle Jane / Help Me Girl (1969) 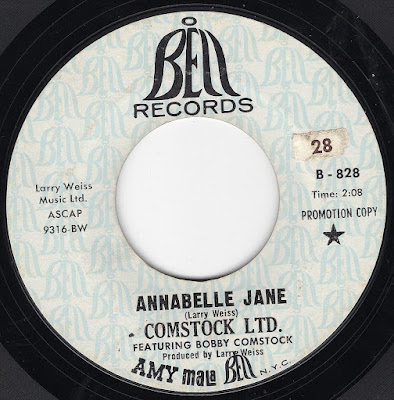 More Bubblegum pop here, but this time I know something about this band! These guys were named after Western N.Y. native Bobby Comstock who had some big local hits in the early sixties, an L.P. on Ascot records in 1966, and three or four 45's on Bell. Comstock was from nearby Ithaca, N.Y. and was an extremely popular act right though the sixties and he continued performing in "oldies" shows till the 90's. Bobby passed away in 2020 leaving us some cool rock & roll to digest, especially his greatest effort, "Let's Stomp", a rock & roll standard.
Five By Five - Apple Cider / Fruitstand Man (1969) 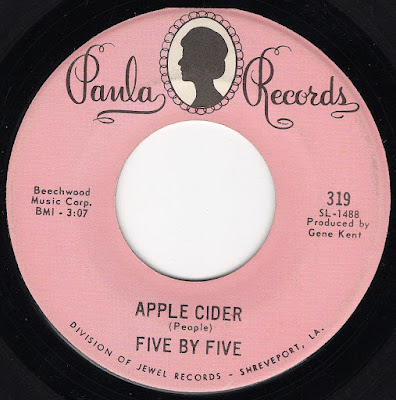 The Five By Five were a somewhat prolific band, I mean, they had eight singles on Paula Records, but only one L.P., which had most of the singles tracks on it. I'm pretty sure these guys from Magnolia, Arkansas were not in complete control of their destiny, but they did put out some way cool, and kind of heavy I might add, rock & roll in the late 60's and they managed to hang on into the early 70's. This is a great two sider that has "fruit" as it's theme. Perhaps the first "concept 45" ever???? Hmmmm....
Helen's Babies - Baby I Need You Now (1968) 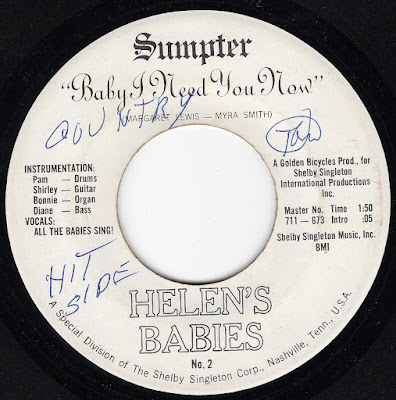 Another stumper....Helen's Babies were most likely from the south, and Shelby Singleton had a bit to do with this release on "Sumpter Records". More Bubblegum sounds I guess, not bad for a "girls in the garage" thing, but I wonder why the radio station guys marked this record up as "country"?????
Lothar & The Hand People - Machines / Milkweed Love (1968) 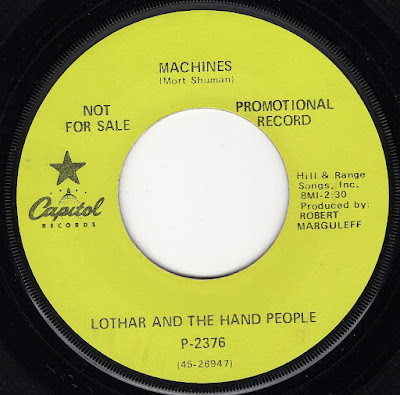 I have a couple of Lothar 45's, obviously this is one of them. Originally from Denver, CO, they relocated to New York City and developed what can only be described as a truly progressive sound, using "Lothar", their Theremin, an electronic instrument with a couple of rods you wave your hand over to make whacked out noises with (I'm paraphrasing here), and the Moog Synthesizer, which could possibly be the most reviled instrument by lovers of rock and roll. I personally am OK with it, depending on it's use, and The Hand People use it well. As far as the band's output, they did release five 45's on Capitol as well as two L.P.s.
NAIF - Love's No Game (1968) 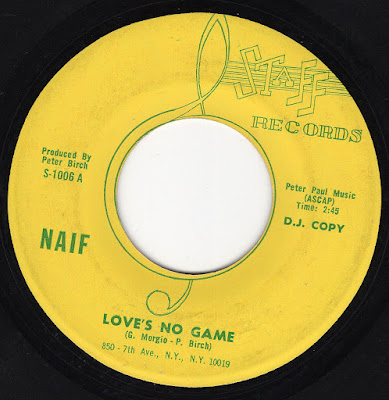 "NAIF". Better known as the "North Atlantic Invasion Force" were from Connecticut, New Haven if I'm not mistaken, and had a few 45's on several labels, but their "biggest hit" was "Black On White" which came out on Mr. G records in 1968. That song, unfortunately, had some lyrics that were "not acceptable", so they re-wrote the song and released it again on the "Staff" label out of N.Y.C. Not bad, but not quite as good as the original.
Mellow Brick Rode - Don't Put All Your Eggs In One Basket / Other Side Of This Life (1969) 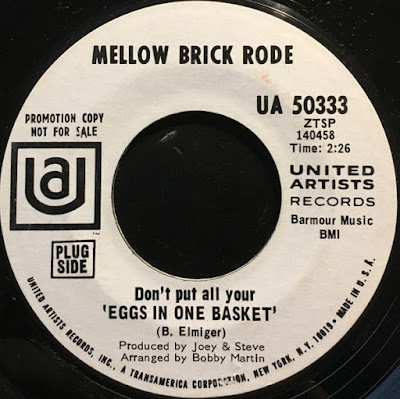 This one threw me off completely. I thought this was just another band from who knows where, but they were actually "The Road" from Buffalo, NY who had a minor hit (fairly big around these parts) with a cover of the Zombies', "She's Not There". This one is pretty much in the same style as their other recordings, but I kinda like their version of "Other Side Of This Life".
Roy Orbison - Southbound Jericho Parkway / My Friend (1969) 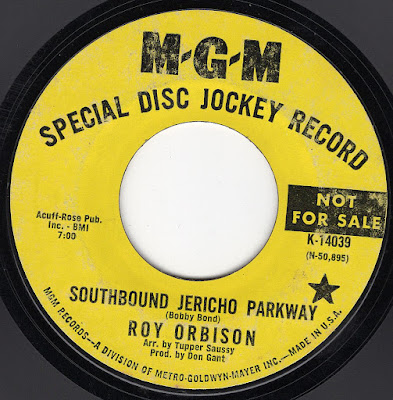 For long tome followers of this blog, you know I never shy away from weird shit, and this one ranks pretty high in the "weird shit" category. I love Roy Orbison, and he had a long and well deserved successful career, but every once in a while, even the great ones stumble. Such is the case with this  seven minute opus, which unfortunately is in crappy shape, although it was a relative bargain. Roy goes into "rock opera concept mode" on this one, and with some really head scratching results as he goes through the dilemma of a man who seems to have lost his wife, and his kids are all messed up, 60's style ya know, and he's just trying to cope with....well...I sorta get lost after the first three minutes, but you get the picture. Truly one the more bizarre 45's I've ever heard.
HERE