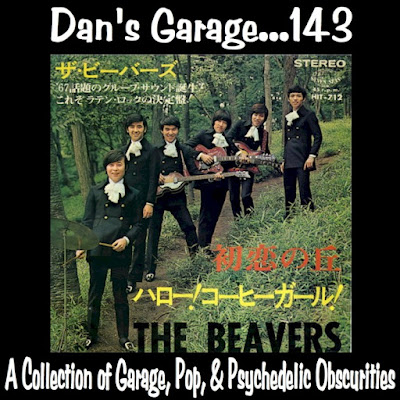 Greetings music lovers! Well, I'm back at it again with some more offerings here. This particular post features some real curveballs, so I hope everyone digs it. While there's a healthy dose of garage and psychedelic stuff, I included a couple of my favorite 45's that don't exactly fit the mold so to speak, plus I'm featuring five Japanese 45's that I got a couple of years back and they are quite interesting to say the least. I hope everyone here in the USA has a great Labor Day weekend and I hope all of you out there enjoy this!
Jimmy Velvet Five - Good Good Lovin' / Heart Breakin' Misery (1966) 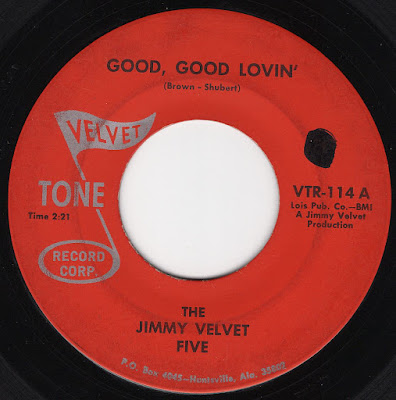 Here's a 45 that's kinda soul influenced, I mean it is a cover of James Brown's "Good Good Lovin'" and it gets the southern "blue eyed soul" treatment here. I guess Jimmy Velvet's real name was Jimmy Tennant and was good friends with Elvis going so far as to have his own Elvis museum in Memphis. He supposedly appeared on American Bandstand a few times as well.
Buffaloes - You Told Me Lies / She Wants Me (1966) 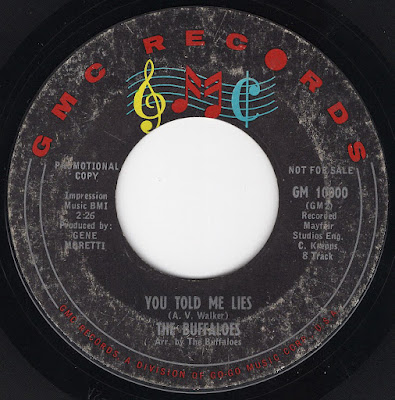 The Buffaloes from Glen Cove, NY released this way cool garage 45 in 1966 and unfortunately was the only record they put out. Both sides are pretty hip and have a good lo-fi feel to them. Check out the feature on them at the great Garage Hangover website.
Kids - Flipped Hair And Lace /Lovin' Everyday (1965) 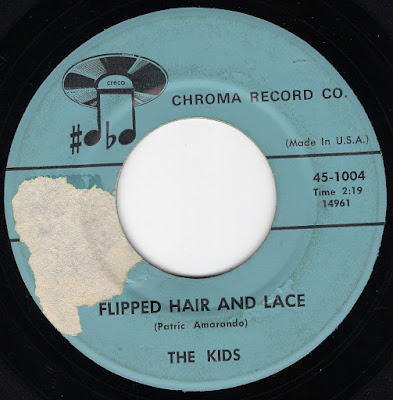 Here's one from my neck of the woods, Auburn, NY famous for the Auburn Correctional Facility where they first used "Ol' Sparky" better known as the electric chair. The Kids were literally "kids" in that the oldest member was thirteen years old and the youngest ten. I gotta hand it to these youngsters because they hang pretty well with the older teenage groups of the era. As far as garage bands go these lads sound pretty tight even if their vocals are a bit off. Both sides of this gem are great fun. Unfortunately I don't have the cool as hell picture sleeve of this 45, but I was able to find a couple of examples of it on the web... 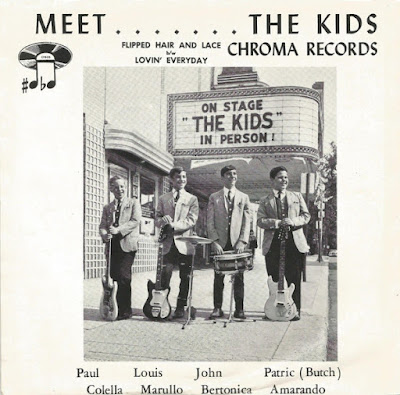 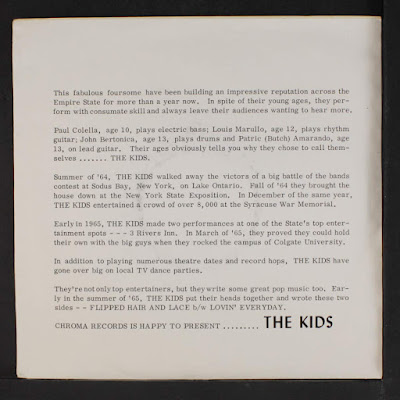 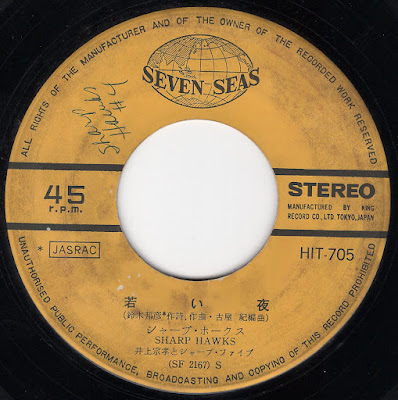 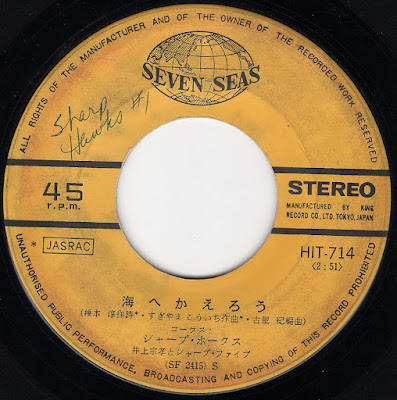 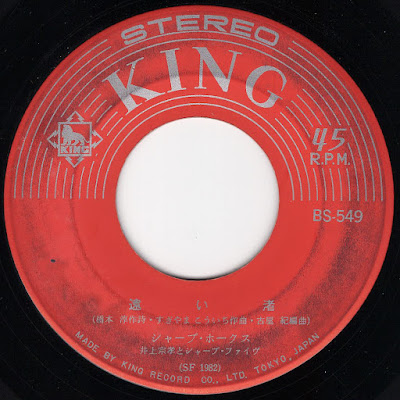 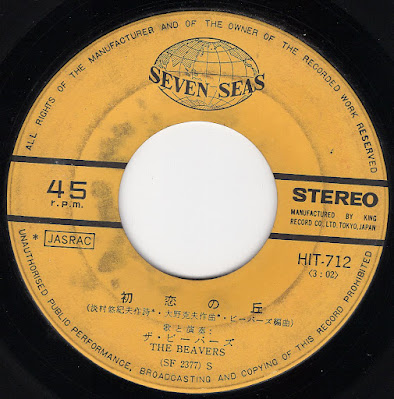 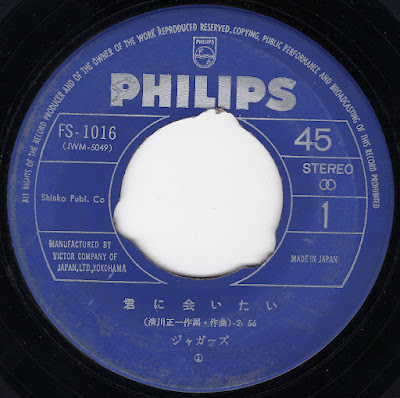 For all of you regular readers of this blog, you'll know that I like to take chances on 45's that look cool and may be a steal. Back in 2018 there was an Ebay listing of "five Japanese 45's from the 60's" and the opening bid was pretty low. Looking at the pics in the listing I'd noticed that "Sharp Hawks" was written on a couple of these and after little investigating I came to find out that they were a popular beat/pop group in Japan. I won the bid (really low by the way) and was pleasantly surprised when the needle hit the grooves on these. All five of these 45's are extremely cool with twangy guitars, cheezy organs, and even some cool fuzz thrown in. Although some of the vocals are corny, the ten tracks on the whole are very hip. I'm going to spare you more commentary on the rest of these because A. they're very similar, and B. I don't understand Japanese, but I was able to translate the titles and they are all listed here to the best of my ability. BONUS. These 45's were all released in STEREO!
Blue Things - You Can Live In Our Tree / Twist And Shout(1967) 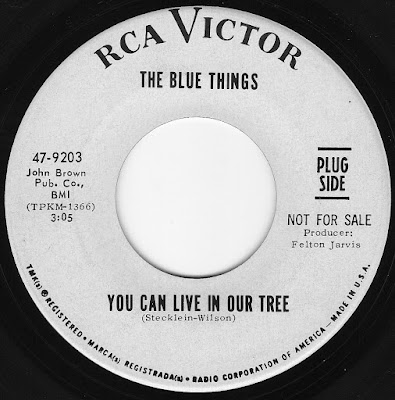 I finally did it. This was the last 45 I needed to find to complete my Blue Things collection of 45's. I'm not exactly a "completist", I mean I have a lot of Beatles 45's too but I'm not going to go out and find every iteration of "I Want To Hold You Hand" that was ever released, although I must admit I have this weird thing about those 45's on the "Hit" label out of Nashville, TN. You know the 29¢ knock offs of hits that were covered by such luminaries as The Jalopy Five? I'm always looking for those, but I digress. I had managed to get my hands on every other 45 by The Blue Things a while ago. Except for this one and it's definitely one of their best. I'm pretty sure their whacked out version of "Twist And Shout" was erroneously put on an Eva Records comp featuring "Texas Punk Bands From The Sixties" We now know that they were indeed from Kansas. Oh yeah, the A side which for some odd reason I'd never heard before is just as cool!
Puzzle - Hey Medusa / Make The Children Happy (1969) 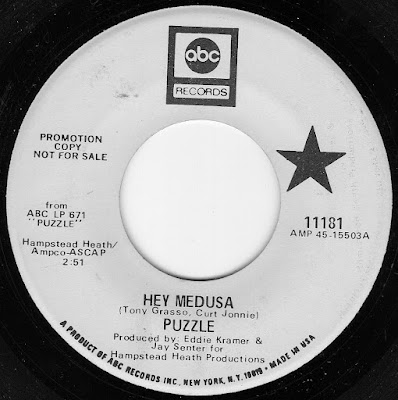 A hard psych outfit from Washington D.C, Puzzle released an LP and this one 45 on ABC Records. Both sides are good up-tempo numbers with some very good guitar work from bandleader Tony Grasso. This usually fetches a good buck on the market but I was able to snag what looked like an un-played copy for a mere bag of shells.
Grin - White Lies / Just To Have You (1972) 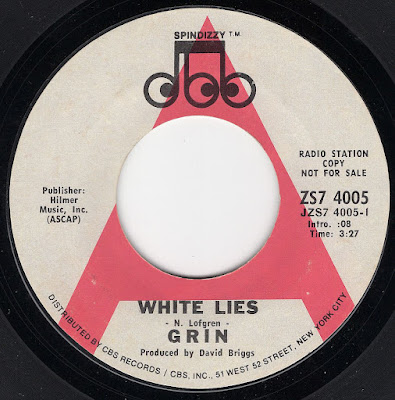 I'm going to take a sharp left hand turn on the next two 45's because they are neither garage, nor psyche or even bubblegum or sunshine pop for that matter. They're just really good. I first heard "White Lies" when I was perhaps 13 or 14 years old and even back then I knew it was a great song. So great I had to include it in the edition of Dan's Garage. Nils Lofgren was barely in his twenties when re recorded this and was featured on Grin's 1+1 LP. This is Nils' crowning achievement as far as songwriting goes as I've tried to dig his other songs, which are good, but not nearly as good as this one. I hope you all like it as well.
Neon Boys - Love Comes In Spurts / That's All I Know (1980) 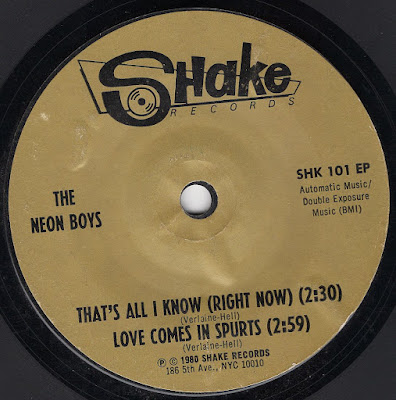 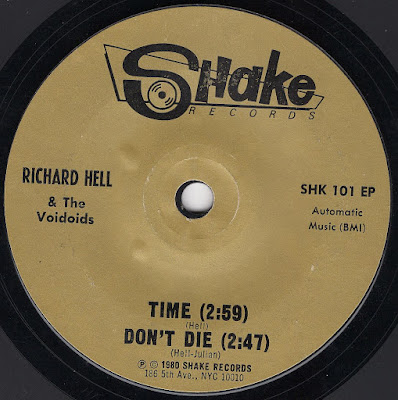 In the late 70's I really got into punk rock. I mean really got into it. My oldest brother Vinny was a record collector (it runs in the family I suppose) and he once brought home a copy of "Live At C.B.G.B.'s" and was kind of raving about all the cool and weird bands that were on it like The Laughing Dogs, The Tuff Darts, Mink Deville, The Shirts, etc. and the sounds were amazing. I discovered that you didn't have to be a virtuoso guitarist ala Jimmy Page to actually strike a nerve. My brother Vic was a guitarist (that also runs in the family) and was playing in a band that was doing some proto punk type stuff at the time and their lead singer came over one day with a copy of Iggy And The Stooges' "Raw Power". I was sold.
It was around that time the the word "punk" was being used to describe the new sounds of '76 and '77 and the place to find these cool sounds were at a record store called "Record Theatre". It was a chain, but someone in charge was getting stuff from the U.K. and their import bins were stocked with the newest releases. Soon they broadened their scope and one of the LP's that I found was Richard Hell and The Voidoids "Blank Generation". I soon had amassed quite a collection of punk and new wave LP's. Unfortunately I sold a good bit of them.
Fast forward to around 1986 when I was at the height of my 60's garage band persona and collecting every 45 I could get my hands on. This was one of them, and I found it interesting that not only Richard Hell was on this with The Voidoids, but with a Pre-Television Neon Boys as well. This is a stunning E.P. and a great example of what was brewing in New York City at at the time. I'm not sure when these four songs were recorded, but it probably wasn't 1980 as the record would indicate. Any additional info would be appreciated.
ENJOY
Posted by Dan at Thursday, September 02, 2021