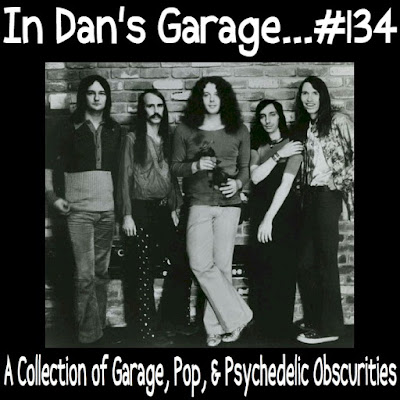 Greetings music lovers!!!! Whew! This one was a looooong time coming and I'm glad I got it finished because I always get this creepy feeling in the back of my mind that I'm seriously neglecting this blog which I've been writing and sharing music with for 10+ years. I should've done a "10th Anniversary post sometime last year, but even that got away from me.
I suffered a somewhat debilitating accident at work last June, and although it didn't put me down entirely, it certainly messed with my mojo for a good six months. That and the holidays and my migration from Windows 7 (which worked just great for the last 10 years) to Windows 10 also put a huge damper on things. I mean what the hell, can they make it any more difficult for you????
Records are still trickling in every month and although I'm not getting big boxes of records that often, like we say around here...slow drip fills the bucket. My biggest issue at this point is getting organized. I'm basically trying to figure out what's been posted as opposed to what hasn't and I sometimes find myself in a state of confusion. Nonetheless, I try to soldier on with this.
As usual, I plucked a bunch of stuff which style-wise is a real mixed bag. Garage, psychedelic, pop, even a little bit of folk is being thrown in there as well and I hope you all enjoy. So without further adieu... Dan's Garage #134!!!!! 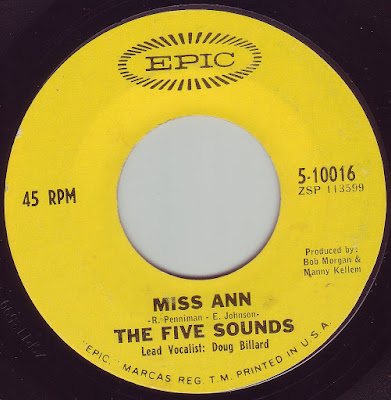 The Five Sounds were a group out of Halifax, Nova Scotia up in Canada and released two 45's on Epic (Their crosstown rivals The Great Scots also managed to get a 45 released on Epic. Seems as if a talent scout was up there looking for cool bands), both which are outstanding, especially this one with it's great performance and excellent production. These guys would eventually change their name to the Central Nervous System and release an LP which I've never heard and a 45 on Laurie records. 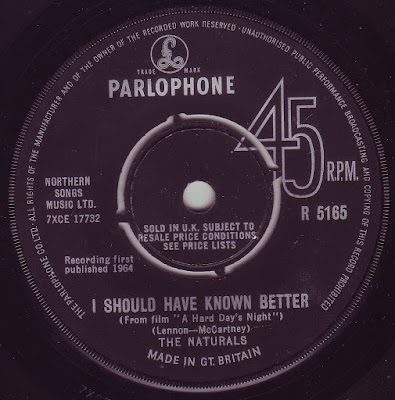 A group out of the UK that released four 45's, four in the UK and two in the US on Liberty. This was one of the four releases in Britain which was a nice peppy cover of The Beatles' "I Should Have Known Better" which I believe made the charts there. Both sides are uptempo and feature some falsetto vocals in the mix. 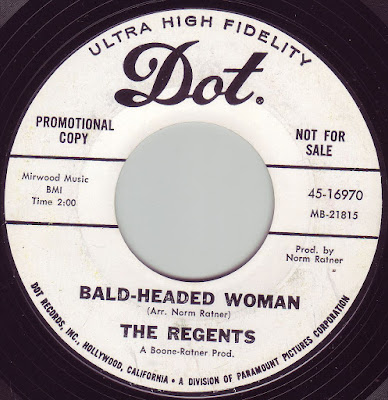 I forgot to add this 'B' side the last time I featured this 45, a decent version of "Bald Headed Woman". The Regents were from California and released several 45's on four different labels. 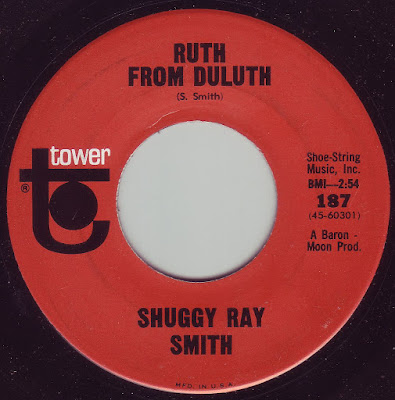 Not exactly sure who Shuggy Ray Smith was, it seems he also recorded as "Ray Smith" as well doing mostly country styled songs and this rocker from 1965. 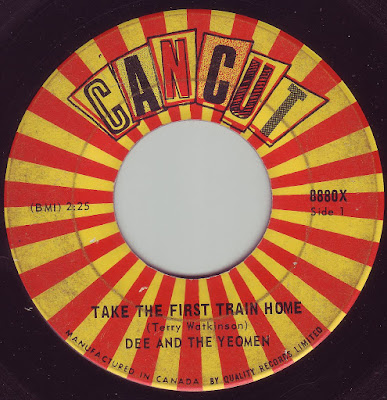 Dee & The Yeomen were from Toronto, Ontario, Canada and were quite popular, releasing seven 45's up there on Wolff and Reo records as well as two here in the US in 1969 as simply "The Yeomen" on Mainstream. They were led by guitarist/vocalist Graham Dunnett who was a transplant from the UK that played in a group called "The Starliners" who shared bills in Hamburg, Germany with Gerry & The Pacemakers and of course The Beatles. He moved to Toronto in 1964 and enjoyed some success throughout the mid sixties. 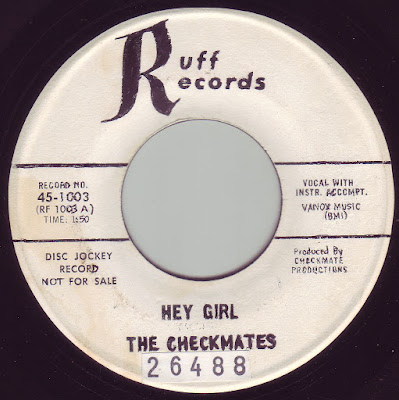 The Checkmates from Amarillo, TX were more famously known as Ray Ruff & The Checkmates who recorded and released about eight 45's which were recorded at Norman Petty's studio in Clovis, NM and where Ruff became a staff producer as well. This was the last he released as The Checkmates and both sides are nice garage/pop numbers especially the flip "All The Time Now". 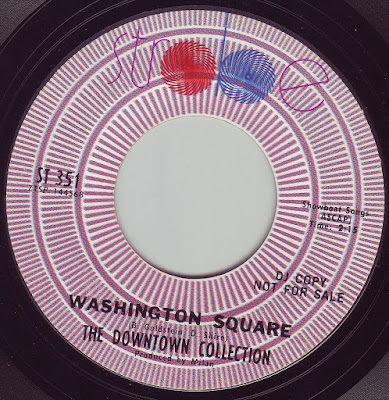 Here's a 45 that's a cover of The Village Stompers folk hit "Washington Square" with some updated hippie lyrics and arrangement for the era. This 45 is noteworthy in that it was produced by Milan Radenkovic also known simply as "Milan" or more famously "Milan The Leather Boy" who had four 45's under that moniker as well as "The World Of Milan" and simply "Milan". He was also involved in a 45 by a bubblegum group called "Ice Cream" that had a 45 on Capitol records as well as a bunch of others. He was a rather busy guy in the sixties until his untimely death in 1971. 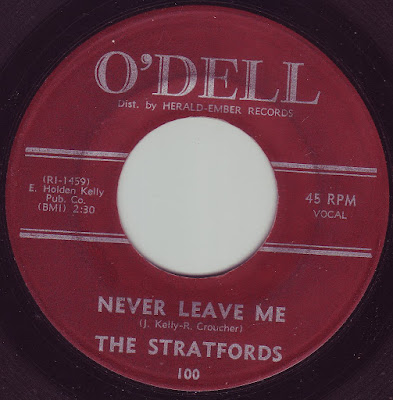 For some oddball reason I always thought these guys were from Pennsylvania but they were actually from Baltimore, MD and this was somewhat of a regional hit in 1964. This tune is real moody and features a male/female duet about two lovers promising never to leave each other. Real teen heartthrob stuff here. The Stratfords had seven 45's which is a lot for a local group in those days. I have one other which is far cooler than this one here. I promise to get to it in the future (if I haven't already!). 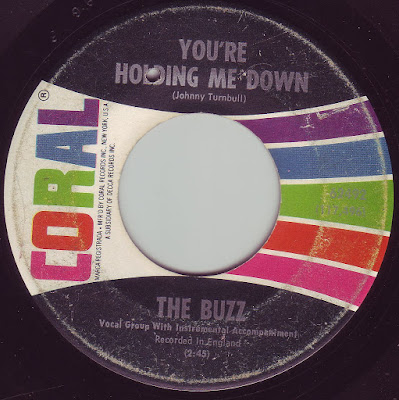 As a record collector who is on a rather tight budget, I'm always looking for steals and deals in the marketplace. I do most of my shopping on Ebay mostly because it allows me to peruse 45's for sale in the comfort of my home or anytime I have my Iphone with me. It's a lot easier than hauling my ass crosstown to one of the few record stores in that even remotely deal with this kind of stuff. I do try to hit the local record show which comes up about twice a year and I sometimes have good luck with that, but since the advent of the internet, Ebay, and other platforms, record shows have gotten smaller with less dealers and good product. Why would anyone pay $75 for a table and schlep their stuff into a large room and hope they get a good turnout? Such is the 21st Century, but I digress. This record represents one of those rare occasions that I stumble on something that is so cool, I gotta buy it no matter what condition it's in.
The Buzz were a group out of the UK, Edinburgh to be exact and recorded this 45 with whacked out genius Joe Meek at the controls. I've read a few articles about this 45 and all of them are spot on, this is the essence of "freakbeat". "You're Holding Me Down" would be a masterpiece without Joe Meek's production, but when you add him to the mix you get a totally demented track that doesn't fail to impress. Heavily compressed with wild fuzz, trebley guitars and shrieking echoed vocals that scream "go back, go back,go back" are the highlights of this 45 and could be Meek's finest moment. The flip is ok but compared to this it falls flat.
Now on to the record itself. This thing usually fetches pretty big bucks wherever it's being sold and you're most likely going to pay well over $100 for it whether it's the US release on Coral, or the UK release on Columbia. I managed to score this on Ebay for $10 in a set sale with the caveat that it was "really scratched up" and in G- condition (G- is nearly unplayable using 'Goldmine' standards), so I was quite horrified when I eagerly opened the package to discover a severely hammered record. I popped it on the turntable and to my surprise played all the way through with no skips. Now, I really am a stickler for playing my own 45's and hate substituting with something from a CD which I certainly could have done, but I present this gem in all it's scratched up glory as is. Dig it. 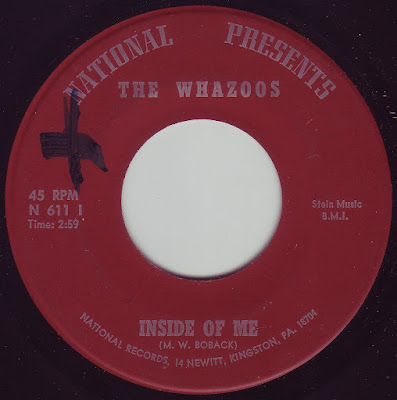 This group out of Wilkes-Barre, PA released this one great 45, a very nice example of late sixties garage/psyche that features some excellent fuzz guitar ala The Iron Butterfly. The flip is an ok version of Sir Douglas' "The Rains Came". 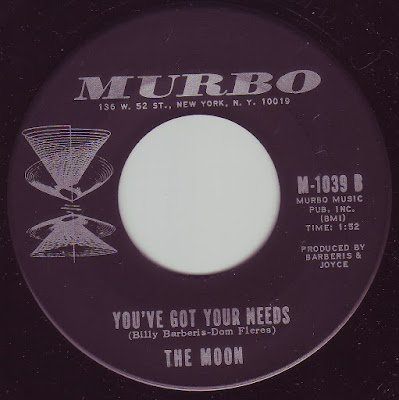 I have this weird fascination with the Murbo records label. Everything that I have on it is pretty cool especially "The Household Sponge" 45. I mean, there were 54 45's released on this label from 1963 to '75 so there's got to be a few stinkers right??? This is another good one, and while it's not any sort of garage punker, it is rather unique in that it has no guitar on either side. "You've Got Your Needs" features an electric piano and cheezy organ with great snotty vocals and some excellent backing harmonies. The flip is a little more subdued, well... a lot more subdued,  with some acoustic piano, bass and drums in 3/4 time but retains great lead and background vocals. I know nothing about this group but have read in a few places that they may have been from New York. 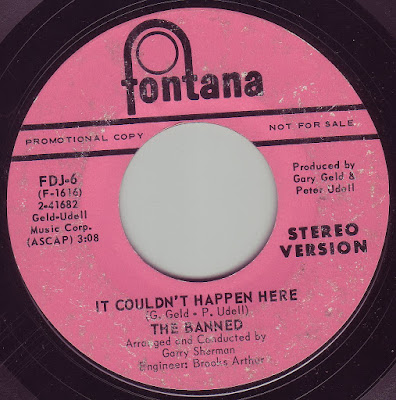 If you've ever seen the picture sleeve for this 45, one would think that The Banned were a group of way cool teenage garage punkers. I mean, I always thought they would be. The Banned, "It Couldn't Happen Here", it all sounds too cool right? That's until I finally got my hands on a copy of this record. Disappointment is probably an understatement, but I grew to like this record as I acquired a taste for "pop/psyche" 45's and this one falls squarely into that category. I'm glad I only spent 99 cents on it. 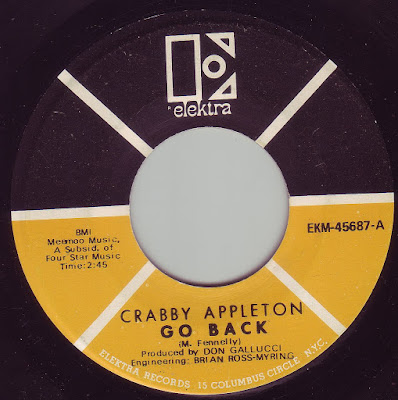 Here's a 45 that actually cracked the top 40 in 1970, but I honestly don't remember hearing it at the time, perhaps my AM radio ears had not developed  (I was 9 or 10 at the time. Oh shit I gave that away!), but upon listening to this, I gotta say it's highly enjoyable. This band was fronted by Michael Fennelly who came out of The Millenium and was produced by Don Gallucci most famous for his genius electric piano playing on the Kingsmen's "Louie Louie", and for being the leader of Don & The Goodtimes. Oh, he also produced The Stooges "Funhouse". In fact, Crabby Appleton and The Stooges shared this production/engineering team and their records were released a mere two months apart. How's that for some trivia!!!! 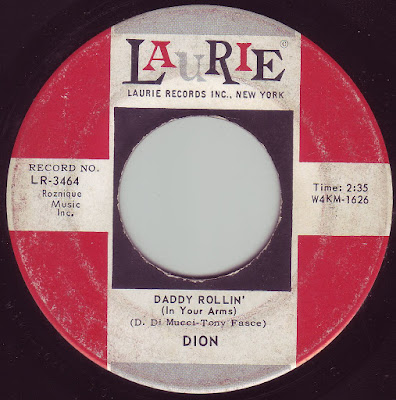 Talk about whacked out records. We all know Dion Di Mucci as "The Wanderer", the "Run Around Sue" guy, who had a slew of hits in the early and mid sixties and then fell to the temptations of heroin, and made a comeback in '68 with his huge hit "Abraham Martin and John". Well, this is the flip to that aforementioned record and it's one of his cooler, if not the coolest track he's ever recorded. Supposedly, this was recorded in the back of a bowling alley with a bunch of Jamaican guys banging on trash cans or cardboard boxes or something, and to great effect. A must have in everyone's collection. 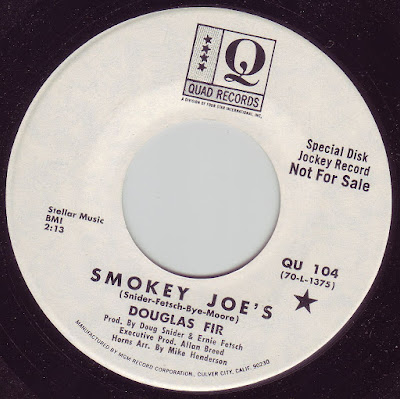 Good uptempo early 70's rock with some added horns that aren't too bad. From Portland, OR. 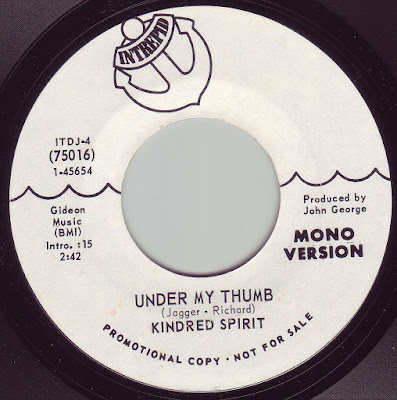 The Kindred Spirit were from Johnstown, PA just outside of Pittsburgh and released two 45's (this one here came in three different variations) and became a regional hit in NW Pennsylvania and eastern Ohio. I gotta say, I didn't expect this version to be so frantic. That and the rather lo-fi recording makes this one a winner! 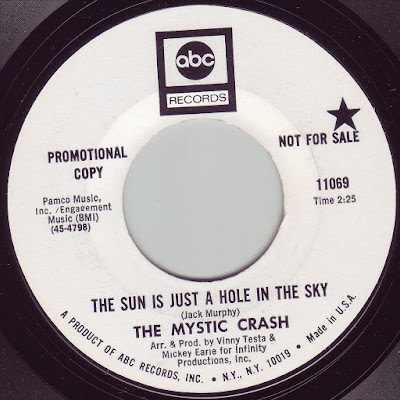 Pretty good psych/pop. Unfortunately, I don't have a lot of info on this band except they may have released an entire LP on ABC. 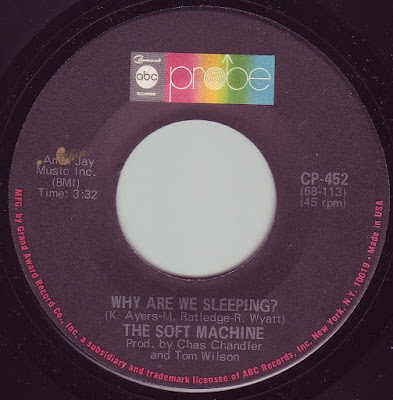 This was the first of what would be only two 45's that The Soft Machine ever released, the other being one called "Teeth" on Columbia records. About the time this one came out they were a four piece and were touring with Jimi Hendrix and and playing with Pink Floyd at The UFO club in London. This was about as "mainstream" as this band would get I believe, I must admit I'm not a fan of these guys. I had about six or seven of their LP's and couldn't really sit through any of them, but this 45 caught my eye, and I'm glad I got it. Very cool spaced out psychedelia.  They would later head into a more Jazz oriented direction, which is where I think they lost me.