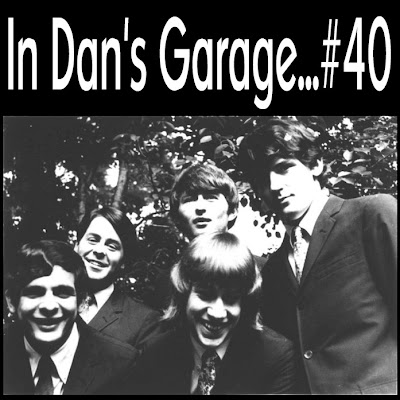 I was going to post this last Sunday, but I got so sidetracked I had to postpone it till this evening. Instead of rewriting this, I'll let you all make believe it's late Sunday morning. Better yet. Just stop reading now, and save it for next weekend!!!!
Happy Sunday friends!!!! After a blistering hot week here in "lovely" Upstate N.Y., I think it's about time we cracked open an ice cold beer, or mixed ourselves a nice cool cocktail and kick back with some good music, don't you think???? I love a good beer in the afternoon or early evening. Maybe with a nice shot of fine bourbon, or Irish Whiskey perhaps??? My favorites (bourbon that is...) are Jim Beam Black and Wild Turkey 101. I'm also a huge Jack Daniels fan too, and Makers Mark is oh so fine. Those all go great with a nice India Pale Ale. There's a place up here that The True Believers play at often called "Monty's Krown". These are some of the best people in Rochester, and they are the ONLY venue in town that let's us play whenever we like, provided there's an open date that is. It is in my opinion, the only true melting pot of Rock & Roll in the city. It's a small pub style bar that's kind of dark and the smell of beer hangs heavy in the air, but it's got such a great "underground" atmosphere, it reminds me somewhat of the Cavern in Liverpool.They also have one of the best beer menus in the city, and they don't serve any Budweiser, the absolute worst beer in the world. I had an argument with a co-worker of mine who thought Bud Light (even worse than regular Bud if that's possible) was a great beer, and he said "It's the most popular beer in the US, so they must be doing something right". My response was, "No, it just means that there are more non beer drinkers drinking beer than ever before". He scratched his head trying to figure out what I meant, and what I mean is, junk like Bud Light, Coors Light, Miller Light, etc., are made for people who can't handle "real beer". Don't get me wrong. I may be a "hop-snobber", but I will drink what's being served. My wife once asked me "If all that's left in the world is the worst beer you ever drank, would you quit drinking beer?" I responded "NO". I consider myself a "cheap beer" connoisseur. Pabst Blue Ribbon is great. So is Utica Club which I was totally surprised they even still brew. Sorry, I got off track here. Drink what you like today. An ice cold brew, a room temperature Guinness, a crisp cool Martini, whatever. Enjoy yourself!!!!! 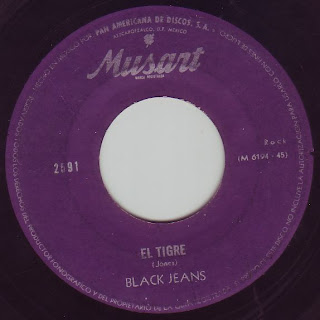 Early 60s or late 50s effort from a wild, rocking Mexican group who had several releases if I'm not mistaken. Excellent rockabilly/proto punk. 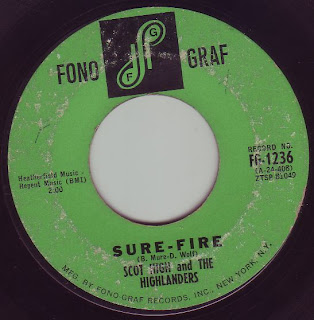 More "proto-punk" from a very obscure group. Great guitar on this one. 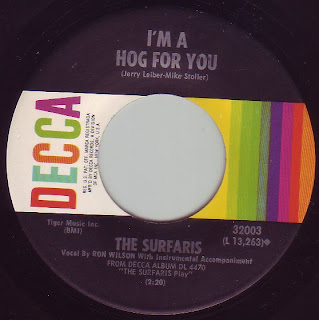 Of course we all know the legendary surf instrumental from 1962 "Wipe Out", but what makes this 45 interesting is it's garagey flip "I'm A Hog For You" and the fact that this issue is a entirely different version than the original Dot Records release. 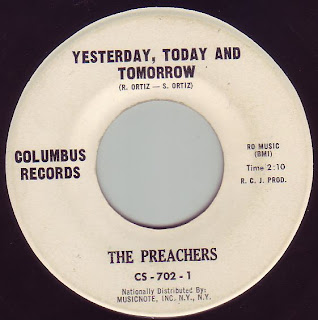 A pretty obscure 45 that claims it was "Recorded In England" on the flip, but these guys sound like they're from the good ol' USA to me. A great folky punker from Brooklyn, NY. Nice production on this one too, with those great background vocals. These guys also released the fantastic "Up There" which is a lot punkier than this one. 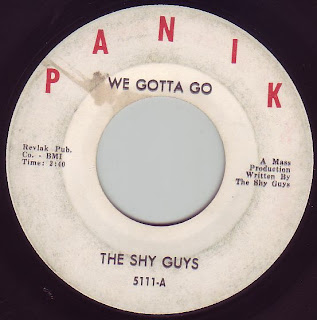 Real teenage stuff from a bunch out of Michigan. Both sides are A-1 garage punk. 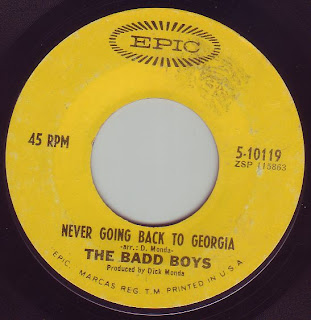 Here are the same guys featured in IDG #17. I still haven't come up with any solid evidence of where they're from, but both sides of this 45 are really good. Even the cover of "River Deep,Mountain High" which has some pretty over the top production on it. 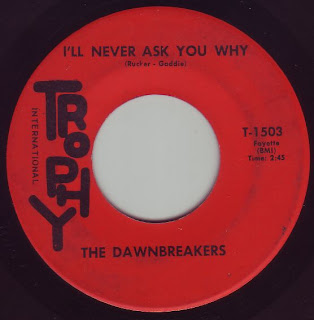 An extremely moody two sider from Kentucky. This 45 features a trumpet, not an entire horn section, but one guy playing trumpet, who was probably in the high school band or something and wanted to be cool, so he hooked up with these guys. They also had a cover of "The Alligator" which is really wild and nothing like this record. 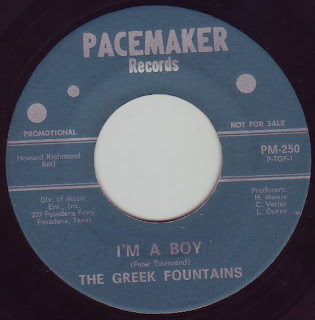 A Louisiana group who was managed and produced by Huey Meaux, the same genius who produced The Sir Douglas Quintet. This two sider features a nice cover version of The Who's "I'm A Boy" 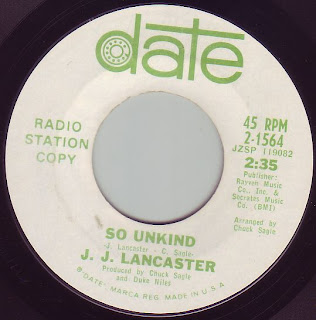 Presumably from Tulsa, OK, this is the only thing I've ever found by him. "So Unkind" is a cool, snarling fuzz punker, but the flip is a nice pop tune, with the same guy laying down fuzz guitar I would assume. 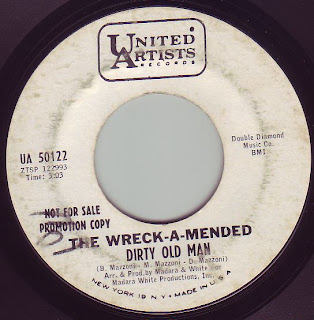 Way cool, deranged fuzz punker from Philadelphia. The flip starts off and ends as a nice garage ballad and then segues into the Little Richard classic. 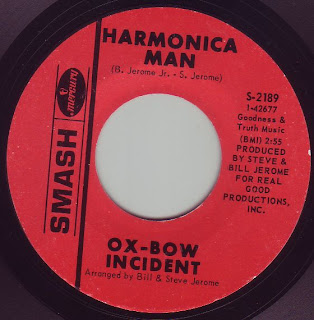 These guys were a very popular Brooklyn, NY outfit that had two 45s, this being their first. The A side is a cool number with some decent harp and the flip is a cover of "Reach Out" which is another sterling example of a NYC area band doing the heavy organ thing much like The Vanilla Fudge, with great results I might add. They were produced by Steve and Bill Jerome who also worked with the Left Banke and the.... 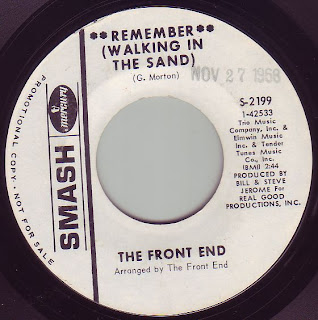 Released just a short while after the Ox-Bow Incident 45, these guys took a stab at The Shangri-La's epic hit. They do a great job too! Those Jerome guys must have been pretty busy back in those days.... 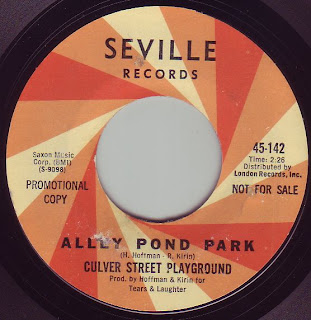 A real obscure group who might also have roots in the NYC area. Their second 45 "East River Lovers" / "Feedback" is cool organ driven psych. This, their first, leans very heavy on the pop side of things. 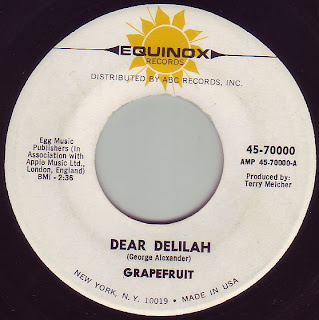 Dreamy psychedelia by a four piece outfit from England. One of my favorites. 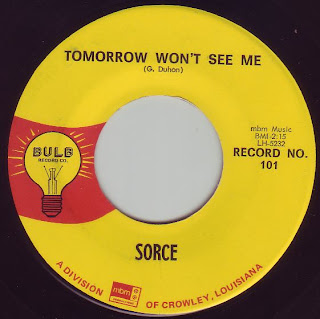 Some real heavy organ drenched psyche from the deep south. Crowley, LA lies between Lake Charles and Baton Rouge and this obscure group were probably popular in that area. The flip is a wild freaky instrumental workout, and was most likely reminiscent of their live shows.