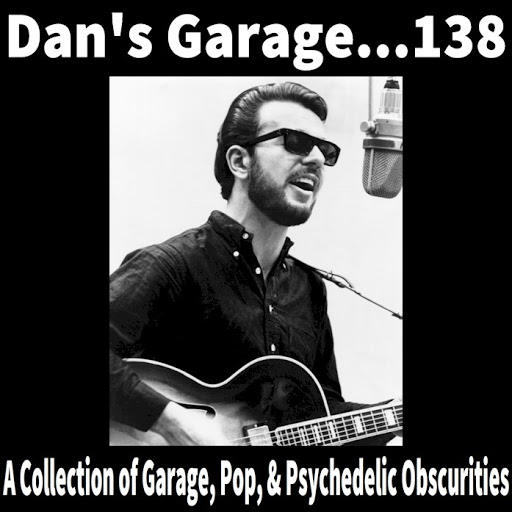 Greetings music lovers!!!!! Looky here, I got to work in another post in as many weeks and I don't think I've done that in over four years. I figure if I'm just going to goof off and play records, I may as well rip them, scan the labels and fire away with another one, and the theme of this one is literally "goofing off listening to records".

I had/have another blog that I largely ignore (because I just don't have the time) called "Dan's Leftovers. That's for the stuff that lies outside of the garage/psychedelic/surf orbit and includes pop, girl groups, novelty records, and just plain ol' weird stuff. I have TONS of 45's like these, and I actually like quite a few of them, so you may see more of this kind of  junk from time to time. I'll buy anything these days if it's priced right. Hell, I recently bought 150 Italian 45's that all came with picture sleeves and they were all in real nice shape. No garage or psych mind you, but a lot of San Remo pop type records plus three spoken word records by the Pope. In other words "oddballs". That's precisely what your getting here, a bunch of oddballs, girl groups, pop, and novelty records so enjoy this one and take all of this with a good sense of humor. 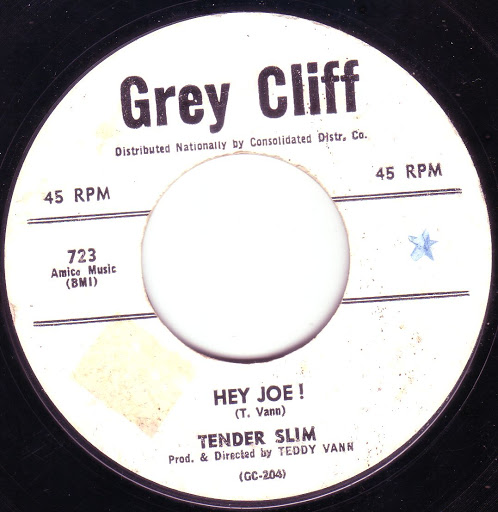 Here's a cool 45 by a guy named "Tender Slim" who from what I can gather was also known as "Tender Joe Richardson", and "Fender Guitar Slim". apparently he was the guitarist and bandleader for the Shirelles. This is good lo-fi blues/R&B/Rock And Roll that was produced by Teddy Vann who has a resume that's way to long to list here.
U.B.'s Group - Percussive Woman (1962) 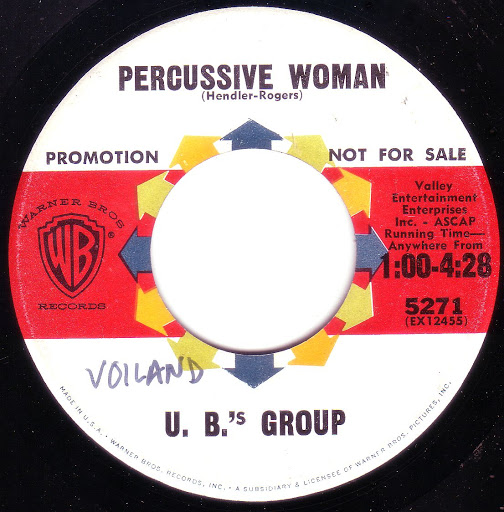 O.K., This 45 is not going to go over well with the "Me Too" crowd and any of you out there who are "politically correct". This "novelty" record came out in 1962 when views of women were quite different than they are in 2020. Personally I find none of this offensive, in fact this is 4+ minutes of beatnik style poetry that describes woman's power over men. Maybe I'm wrong here. Maybe this is an attempt at showing how women are actually more powerful than men.(?) In any case, I find this record to be rather amusing and a real good microcosm of the times in 1962. P.S. I just realized that I did not add "Sneaky Pete" the A side to this 45 which is a great instro. I'll add it next time.
Carran Bruce - When The Rains Came / I Looked Away (196?) 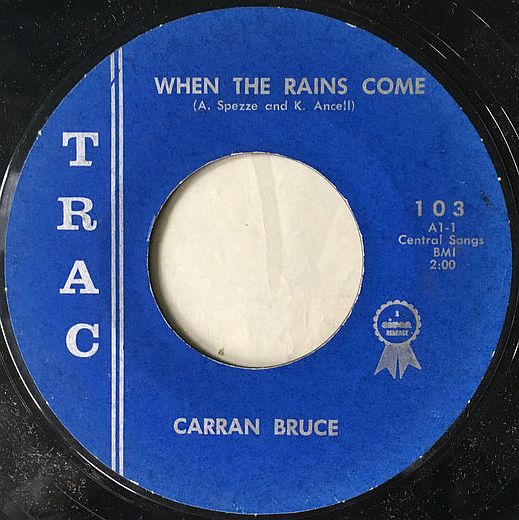 This one is tough to get ant info on. I wanna say that this is someone from the east coast, perhaps someone here in upstate NY as it is a "Circa Release", a label that appears on many upstate NY records, but I can't say for sure. Anyway, I've had this 45 forever (one of the first things I ever bought for 25¢) and have listened to it on and off over the past...oh...35 years, and it has grown on me. Somewhere between girl group, garage, and country, this is actually quite an enjoyable record.
Henry Thome - Scotch And Soda / Wolf Bait (1962) 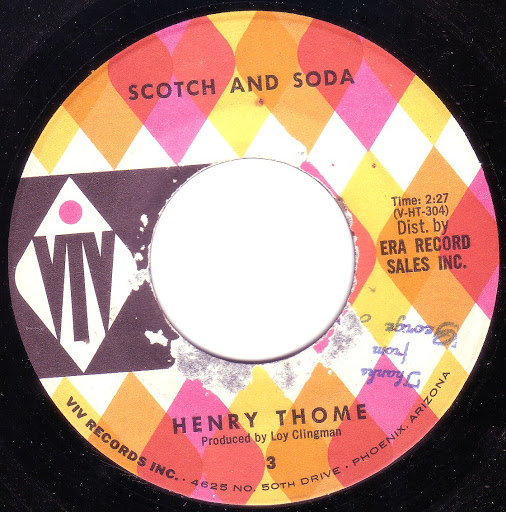 Well....I did a little research on this and discovered that this was a song performed by Johnny Ray back in 1962 but this is actually the original article which ol' John Boy copped off of Henry Thome. Now seriously, who's record are you gonna buy? Johnny Ray's or Henry Thome's??? Most people bought Johnny Ray's but frankly, I've listened to both and think Henry's is the superior cut. The flip is also great. An ode to a chick who Henry's got a thing for.
Ronnie Wallis & The Rajahs - Never Leave Me / Goin' Steady (1965) 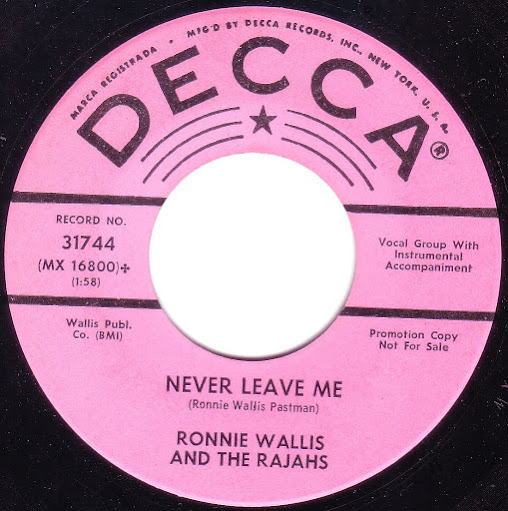 Here's a 45 that is rather interesting. I read about this one a while back but have had trouble recalling the website where I read it (BOOKMARKS DAN!!!!) but I will paraphrase here. Ronnie Wallis' mother was somehow connected to the music business and ended up in Australia for something, I cannot recall, BUT, she brought her daughter with her, Ronnie, and got The Rajahs, who were a very popular group at the time to back Ronnie up on a few songs and these are at least two of them. The Rajahs basically did tributes to the Beatles, backed Johnny O'Keefe, a very popular Australian singer, and worked in the studio as well, as evidenced by this rather cool 45 by Ronnie Wallis. Ronnie never hit the big time but at least she left us with this little boppin' gem.
Kelly Garrett - Save Me From Myself / The Boy On The Drums (1965) 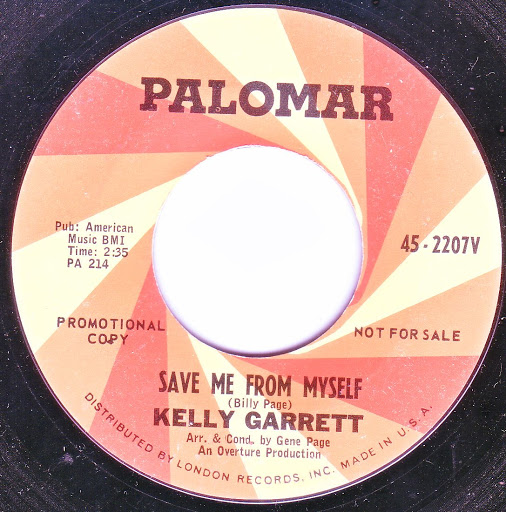 Here's a real nice 45 from Kelly Garret who made appearances on shows like "Shivaree", Shindig", "American Bandstand", etc. but never really hit the big time. I bought this 45 from Ebay from a seller who listed it as "garage", yet, it had a really low opening bid (99¢ I believe) so I figured what the hell. Excellent pop from the mid 60's and I'm not sure what happened to Kelly Garrett, I think she had a successful career as an actress on Broadway and Hollywood but at least she left us with this fine piece of pop music.
Dr. West's Medicine Show & Junk Band - The Eggplant That Ate Chicago / You Can't Fight City Hall Blues (1966) 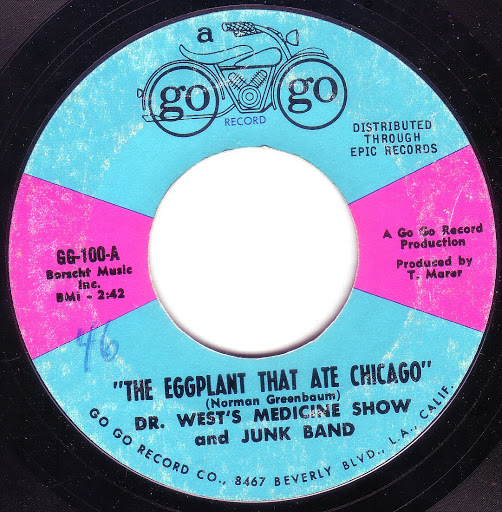 If we weren't in novelty territory yet, we're here now. Dr. West and his band were basically Norman Greenbaum's side project as he was having huge hits on the top 40 with "Spirit In The Sky". This one is from 1966 and pre-dates his "hit" but is a good example of the "Jug Band meets novelty song" concept.
Shannons - Born Too Late / Mr. Sunshine Man (1968) 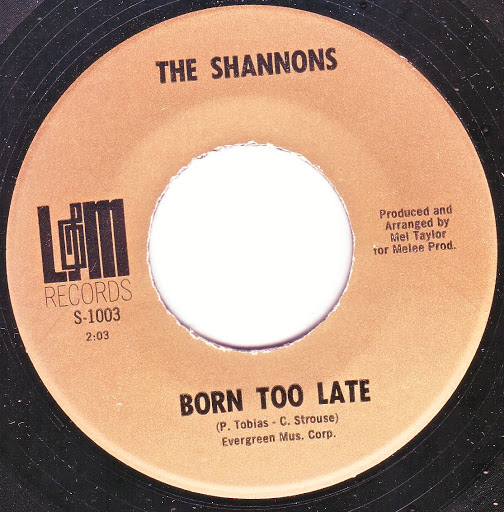 Very nice sunshine pop from a trio of L.A. girls that sound so sweet on their cover of the Poni-Tails big hit. Unfortunately, the public wasn't into a re-make of an "oldie" from six or seven years ago. Perhaps if The Shannons had made "Mr. Sunshine Man" their 'A' side , they would have had better luck. Just speculating......
Vanity Fair - Peter Who? (Peter Pan) (1967) 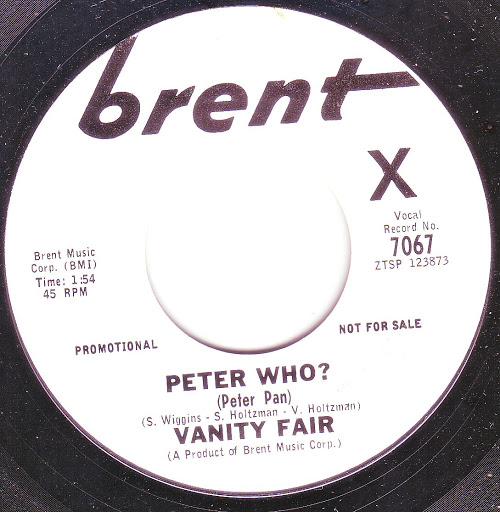 Sooo...another girl group,and from what I've gathered, they were from somewhere around Houston, TX as they were managed buy the same crew that managed Fever Tree, who were on Mainstream Records, an affiliate of Brent. Not to be confused with the British group of the same name that had a hit with "Hitchin' A Ride".
Dion - Purple Haze (1967) 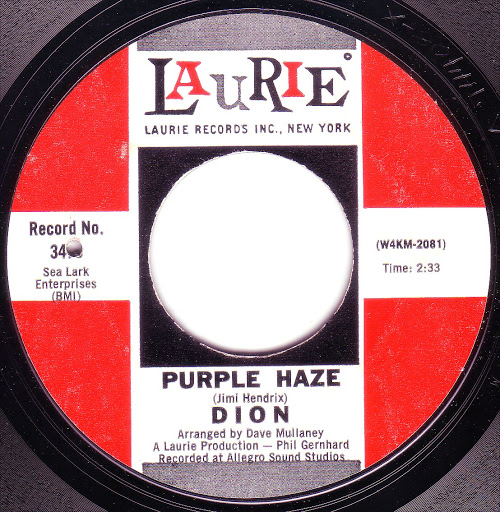 Yow! Everyone knows Dion DiMucci, a great Italian American, from the Bronx, who led one of the most iconic do-wop groups ever, recorded tons of hits and had a great career. Well, somewhere in the mid sixties, Dion got sidetracked somehow and recorded this absolutely bizarre take on Jimi Hendrix's classic. I can't rally describe this one, except that ol' Dion was probably pretty high at the time and decided to take the song in a different direction???
Art Nouveaux - Extraterrestrial Visitations / The Way To Play It (1967) 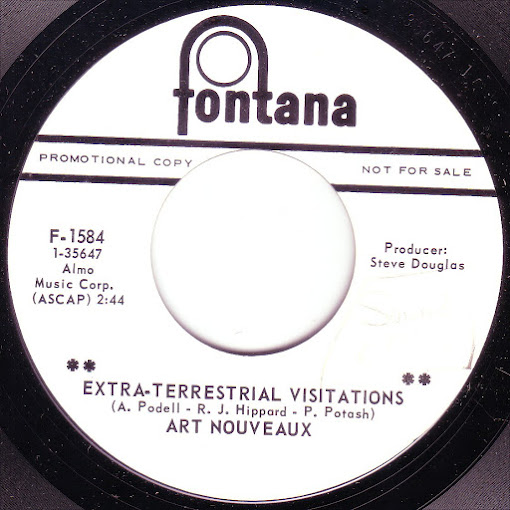 Here's a 45 that's probably some sort of studio concoction. I can't really find any info on this 45 except that producer Steve Douglas was a respected sax player and session musician who worked with Phil Spector, Duane Eddy, The Beach Boys, and also produced The Lettermen and Mink DeVille. I think if this was a studio group it would be safe to assume that the band here were a bunch of The Wrecking Crew.
Daddy Dewdrop - March Of The White Corpuscles / Fox Huntin' (On The Weekend) (1971) 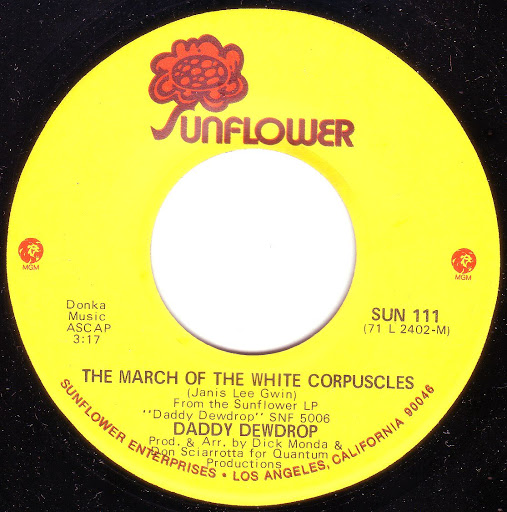 Daddy Dewdrop a/k/a Dick Monda, released an LP and a few 45's in the early 70's including "Chick A Boom" (Don't Ya Jes' Love It)" which reach #9 on the Billboard charts. I must admit, I've never heard that song in my entire life and I grew up on AM radio back in the early seventies (I was in 'junior high" at the time) and stil haven't heard it, in fact, I never heard of Daddy Dewdrop until I picked up this kooky 45 a while back. It's actually kind of cool with a haunting organ and the vocals sounding like they were piped through a Leslie speaker to nice effect. The B side sounds like typical early seventies "rock".
Misty - Resurrection Shuffle / Baby, I Love You (197?) 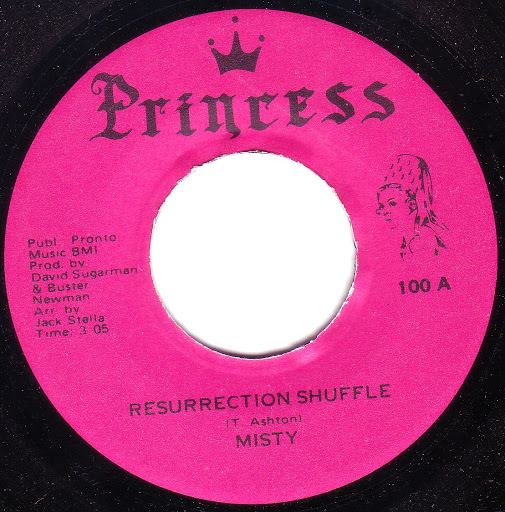 Another one of these 99¢ 45 listed as "garage" that I was able to score for the low bid. I'm not sure if "Misty' is a band or solo artist but it really doesn't make a difference. The first time I ever heard this was truly a WTF moment. The band is nothing terribly exciting, it's when "Misty" starts singing. That's when things get, well....exciting? Misty's voice is, to be kind, "unique". I'm not sure if she's an 11 year old, or an adult trying to sound different, but rest assured, the results are flabbergasting. The A side is a cover of  Ashton, Gardner, & Dyke's "Resurrection Shuffle", another song of which I was totally unfamiliar with, until I heard this. The B side is, well...if Misty is 11 years old, rather disturbing to say the least. After hearing this I tried doing some research on this record, and outside of a couple of other bloggers who pretty much hold the same opinion as mine, I came to a dead end. I have some other 45's that are from Ohio which have similar labels, so that might be a good guess as to where they're from, but I really can't say for sure. Don't say I didn't warn you.
Willard & The Kohouteks - Purple People Eater / I Can Make It By Myself (1973) 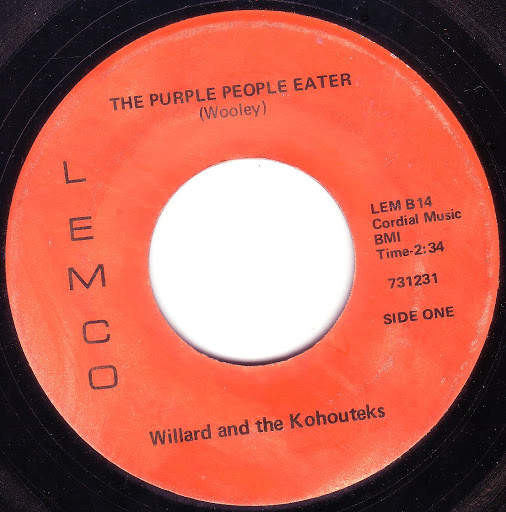 In late 1973 when I was a young lad of 12 going on 13, the comet Kohoutek was one of the biggest crazes in pop culture at the time. It was huge, it was from outer space, it was supposedly from outside the solar system and in December of that year, it was going to light up the sky like nothing any earthling had ever seen in their lifetime. Well....Kohoutek turned out to be a big dud, but not before these guys decided to cash in on the hype with a re-make of Sheb Wooley's classic "Purple People Eater" done in true early seventies "rock" style!!!!
Dust - The Pledge / Bertha (1969) 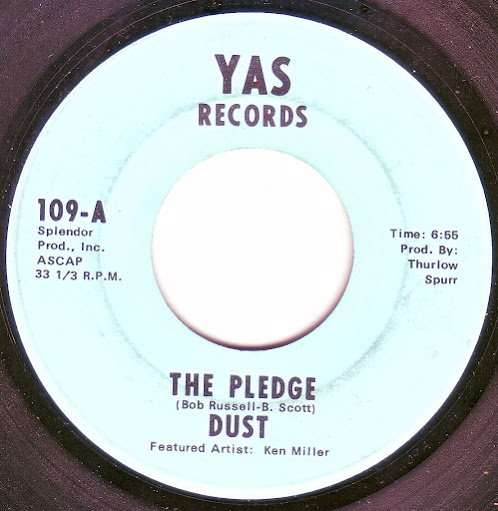 I'm going to end this post with a 45 that's not actually a "45". "Dust", I believe, were from the Detroit area, or perhaps western Ohio, I've seen different info, but these are definitely not the guys who had a couple of LP's on Kama Sutra and featured Richie Wise and Kenny Aaronson. This group had two 45's, this being their second and I must say, it's another kook fest. Don't get me wrong here...I'm all for the Pledge Of Allegiance, and I consider myself a pretty patriotic guy, but the "lead vocalist" goes way over above and beyond mere patriotism, no, the lead vocalist here explains (in 6:55 excruciating minutes) what "The Pledge" means to him, all this done over a backdrop of "He Ain't Heavy, He's My Brother". The flip is a comedy routine done over Them's "Gloria" so you sort of get a two-fer of nuttiness on this 7 incher. So, why is this not really a "45"???? Because in order to fit the lead singer's pledge soliloquy on the A side, they had to slow things down to 33⅓ in order to fit every word. Pretty clever huh?
IT'S ALL HERE
Posted by Dan at Sunday, August 30, 2020